Smaller military budgets and delays in putting GPV 2018-2025 into place will apparently trickle down into reduced orders for Russia’s defense-industrial complex (OPK) in coming years.

According to TASS on June 15, Deputy Chief of the Main Armaments Directorate Boris Nakonechnyy said the MOD can’t fully “load” OPK enterprises with orders during the next GPV.  “As the primary customer for weapons and military equipment, the Defense Ministry can’t fully support the work of enterprises,” he told the news agency.

There may be some reduction in defense orders during the new arms program, Nakonechnyy said.  But he indicated the MOD would still support the scientific work (presumably the RDT&E) of Russian defense-industrial enterprises.

Nakonechnyy said the MOD doesn’t expect global military threats to decline, but it’s not possible to increase substantially the funding needed to counter them.  At the same time, he emphasized it’s important for Russia not to lose the current tempo of development in its OPK, and not to allow itself to lag behind world leaders in military technology. 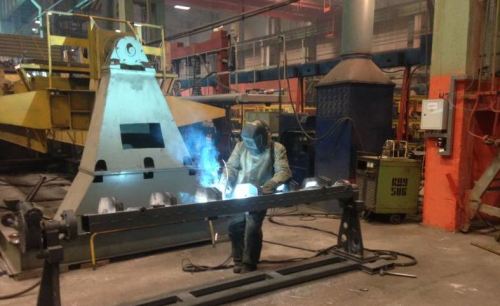 Welding parts for BMP-3 at Kurganmashzavod

TASS provided no context for Nakonechnyy’s comments.  Other media outlets ran the TASS story as is.  Utro.ru, however, provided its own interpretation of his remarks.

While perhaps somewhat alarmist, Utro writer Andrey Sherykhanov puts Nakonechnyy’s statements in the context of the continuing battle between the defense and finance ministries over future military spending.

Sherykhanov recalls the recent Vedomosti report putting likely appropriations for GPV 2018-2025 at 17 trillion rubles, three times less than the original MOD request.  The peak of defense orders, he concludes, is already past.  The military will have no orders for production enterprises, which will close and send their workers on indefinite furlough as they did in the 1990s, he writes.

But maybe, Sherykhanov opines, this won’t be necessary since President Putin has said the OPK’s potential should be harnessed to the needs of cutting-edge, science-intensive sectors like medicine, energy, aviation, space, and information technology.  Last year the Supreme CINC himself said 30 percent of OPK production has to be for the civilian market by 2025, and 50 percent by 2030.  Massive state defense-industrial holding company Rostekh has already announced that half of its output will be civilian by 2025.

Sherykhanov writes that there’s no real concern about this new program of conversion to civilian production at present:

“In the upper echelons of power, they spoke about it just a year and a half ago. There’s a gathering sense that the leaders of Russian defense enterprises aren’t beating their heads with this, concentrating as they are completely on military orders which OPK enterprises are provided until 2020.  That is, they act according to this scheme:  we’ll handle this, and then we’ll see.”