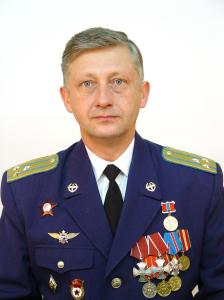 On Monday, the Defense Ministry announced Colonel Sergey Vladimirovich Dronov as the new Chief of Air Forces and Air Defense in the Far East.  His predecessor, General-Lieutenant Valeriy Ivanov, has a new post in the Operational-Strategic Command of Air-Space Defense (OSK VKO or ОСК ВКО).

The 48-year-old Dronov was born in rural eastern Ukraine.  In 1983, he graduated from the Yeysk Higher Military Aviation School for Pilots, and began his service as a fighter-bomber pilot in the former Belorussian Military District.  So he’s an aviator, no surprise.

According to the Defense Ministry website, he served in aviation units in the North Caucasus and Siberia, and in command positions from flight commander to division commander.  He graduated from the mid-career Gagarin Air Forces Academy in 1992, and the General Staff Academy in 2007.

Dronov started his Far East service as commander of the Ussuriysk Composite Aviation Division in 2008.  In August 2009, he was assigned as deputy commander of the Air Forces and Air Defense Army (AVVSPVO) in the Far East.

The Defense Ministry reached down to replace an O-8 with an O-6.  This may be part of its continuing effort to reduce its top-heavy rank structure.  Recall Defense Minister Serdyukov’s description of the ‘bloated egg’ in rank distribution.  But Dronov will probably be promoted to general-major soon.

It’ll be interesting to see how other appointments play out.  Dronov just took over the existing Khabarovsk-based 11th AVVSPVO.  That’s an easy one.  But presumably, with the cut to four MDs, two of the current five AVVSPVOs might disappear.  The 6th AVVSPVO in St. Petersburg might meld into the Moscow-based Special Designation Command (КСпН) in the new Western MD.  And the 14th in Novosibirsk could be subsumed by the Yekaterinburg-based 5th  in the Central MD.  Look for more air and air defense command appointments.

Kornukov is a member of a group calling themselves the ‘Extradepartmental Expert Council on the Problems of RF Aerospace Defense.’  He also advises the General Director of Almaz-Antey.

He called aerospace threats the greatest danger for Russia’s security.  He said:

“An attack from space decides everything now, strikes from space can be delivered to any point on Earth.”

“We, unfortunately, created a time lag of 20-30 years behind our possible enemy.”

The ex-CINC says, although the VKO concept was approved in 2006, little has changed:

“Years pass, but everything stays the same.  And to say that we’re ready for something now would be an exaggeration.  We can now resist an air attack from the standpoint of remaining S-300 systems.  As well as with those residual Su-27 and MiG-29 aircraft, the majority of which lack engines and spare parts.  The picture is simply terrible.”

He also noted that new systems are progressing slowly, and are entering the armed forces’ inventory even more slowly.  He believes the Operational-Strategic Command of Aerospace Defense (OSK VKO or ОСК ВКО–the old Moscow Air and Air Defense District) can only destroy 1 in 5 targets:

“If the reliability earlier was 96 or 98 percent, then now the effectiveness [of systems in the inventory] is in the range of 15-20 percent.  What’s meant is how many aircraft of 100 could get through without being countered.  Now about 80.”

Kornukov recommends establishing VKO under the VVS, and under PVO specifically.  For example, he’d like the Moscow-based OSK VKO to control its own missile-space defense (RKO or РКО) formations and units.  He says:

“Once all missile-space defense was in one set of hands–the PVO CINC.  He answered for PVO and for RKO.  Now the thinking is inexplicable:  each is dying by itself.  There’s not a person defined as responsible even for air defense.”

“I think the correct decision would be for everything  to be located in one set of hands, and one person answering for the condition, training, employment [of PVO means].

He reminded the audience that, once the province of PVO, control of anti-missile defense went first to the RVSN, and now resides with the Space Troops.  Olga Bozhyeva reported that Kornukov wants RKO, specifically the 3rd Missile Attack Warning System Army to come to the Air Forces, and the latter should change its name to reflect its aerospace orientation.  He doesn’t like the idea of creating a new armed service called aerospace troops that would control PVO.

Asked about Russia’s ability to defend against potential missile attacks from North Korea or Iran, Kornukov called the country’s capability to counter these threats ‘limited.’  He said, although the S-400 can cope with air-breathing threats, Moscow has no means for countering ‘operational’ (i.e. intermediate-range) missiles.

Other members of the ‘Extradepartmental Expert Council’ had their say as well.  Former chief of PVO’s equipment ordering directorate General-Major Kolganov said:

“. . . the VKO concept developed several years ago is not supported today organizationally or financially.  There is no targeted program for its realization.”

“. . . in Russia they remembered about VKO only after the U.S. began to test the X-37 orbital glider.   . . . everyone’s occupied with a general assimilation of budget resources, and not at all with the development of new strategic technologies for modern space systems, reconnaissance, [and] missile attack warning satellites . . . .  This can’t come from a private businessman.  He comes to grab some budget money and sell what’s been made for scrap.”

“We lost 300 super-technologies, primarily in aviation and air defense.  In particular, in the production of supergraphite, which is used in nose cones for missiles . . . .”

“It is time to move from words to deeds, to take purposeful directions and targeted programs for developing new aerospace defense systems.”

“But we are waiting for someone to come and help us.  No one will.”

Kornukov is an old PVO guy–albeit an Air Defense Aviation pilot; he was the first CINC of the VVS after it subsumed PVO.  Maybe he, and the others, are just shilling for Almaz-Antey to get even more from the State Defense Order.  Or perhaps their assessments are sincere.