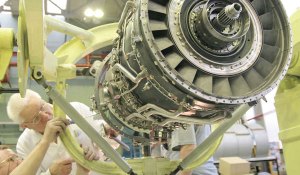 Salyut believes it has basically defeated Saturn in the Defense Ministry’s tender to produce a fifth generation engine for the PAK FA, but Salyut fears development will be given instead to the newly created ODK, the United Engine-building Corporation.

Meanwhile, in OAK–the United Aircraft-building Corporation, they think the Defense Ministry may be considering not making a new engine for the first PAK FA model, and instead concentrating engineering resources on development of a 5th generation engine for future modifications of the new fighter.

Salyut believes it decisively beat Saturn in the tender’s first phase, but the Defense Ministry has not announced the second and conclusive phase possibly because, according to Salyut’s Dmitriy Yeliseyev, the issue of creating the fifth generation engine was automatically decided when Saturn joined ODK.  But Salyut will insist on completing the tender process to decide who will be lead designer for the 5th generation fighter’s engines.

Salyut is now focused on modernizing the fourth generation AL-31 engine.  But test models of PAK FA have Saturn’s 117 engine, a modification of the AL-31.

OAK representative Konstantin Lantratov says the fifth generation engine has fundamentally new requirements, particularly in the areas of radar and infrared signature reduction.  OAK believes the Defense Ministry is not announcing the conclusive phase of the tender to build PAK FA’s engines because it’s waiting for the aircraft’s test results with its current engines.

Marker.ru asks is it necessary to make a 5th generation engine right now?  Wouldn’t it be better to concentrate work on producing engines for aircraft that will follow the PAK FA?  If a new engine starts development today, it will be ready in 5-7 years, about the time modernized or other variants of the PAK FA will be appearing [of course, this assumes the original PAK FA is successful and operational pretty quickly].

OAK’s Lantratov seems to think the Defense Ministry should decide now, if it wants to pay for new engines, and is willing to risk paying and not getting the right results.

Marker.ru consults CAST’s Konstantin Makiyenko . . . he thinks the Defense Ministry has no reason to hurry.  ‘Deeply modernized’ fourth generation engines from Saturn and Salyut are meeting VVS and PAK FA requirements, at least during the test phase.

He thinks a real 5th generation engine is 10 years away.  The need for more powerful engines will arise as other variants (2-seat, strike, naval, etc.) of the PAK FA appear.  Over their life cycles, aircraft get heavier and thrust has to keep pace, so more powerful engines would need to appear around 2020 anyway.