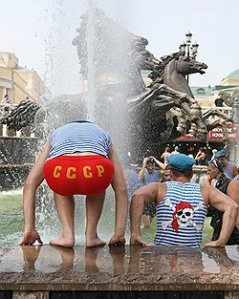 Just closing the loop . . . there were “no large incidents or violations of public order” during VDV Day celebrations yesterday, according to an MVD spokeswoman who talked to RIA Novosti.  She said 106,000 Russians joined in 525 commemorative activities in 347 cities.

However, RIA Novosti reported a fight on Manege Square next to the Kremlin late Monday evening.  The incident involved young men from Dagestan and former VDV men.  Two of the latter were hospitalized with head injuries, while a third suffered a gunshot wound.  RIA Novosti reported 20 ‘Dagestanis’ held by police while they investigated to determine identity of the shooter.  No former VDV men were arrested.

Other media outlets had different details.  Regions.ru said seven were injured, including three hospitalized–one man with a serious knife wound, and two others with broken ribs and bones.  It said 15 ‘Dagestanis’ were detained.  It also provided two versions of how the fight began.  In one, the ‘Dagestanis’ attacked the VDV veterans; in the other, the VDV men started it by stealing watermelons from a vendor near Samarkandskiy bulvar.

Novyye izvestiya reported that VDV men burned a black BMW near Krymskiy Val while one of them videotaped the scene.  It concluded that the revelry was down because of the holiday falling on Monday and the heat.

RIA Novosti called the day peaceful on the whole, with 24 VDV men arrested for minor violations.  Fifteen were treated for injuries, including 9 who were intoxicated.  From the bizarro file, police stopped a drunken man dressed like VDV (but supposedly lacking any relationship to the Airborne Troops) as he tried to drive a tractor across Red Square.

Newsru.com reported on an incident in Yekaterinburg.  It said a group of three VDV guys got into a scuffle at a ‘non-Russian’ cafe.  In the end, 40-50 VDV brawled with 15-20 men of ‘non-Slavic appearance.’  There were no serious injuries, but the VDV reportedly damaged the premises heavily.

Reporting from Krasnodar, RIA Novosti said local police noted no serious violations of public order, but still had to deal with several obstreperous groups of VDV veterans.  They detained 50 men, and sent 15 others to sobering-up stations.