Their Man in Pyongyang 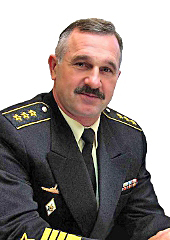 Sidenko will visit the DPRK from August 22-26, while North Korean leader Kim Jong Il is in Russia’s Far East to meet President Medvedev.

Moscow’s once close military relationship with the DPRK declined to practically zero over the past 20 years, hence the surprise of yesterday’s news.  Meanwhile, Russia cultivated military-to-military ties with the rest of northeast Asia — China, Japan, and the Republic of Korea — leaving its old ally in the cold.  Until yesterday.

Additionally, according to the press release, the sides will discuss the future of cooperation between their Ground Troops, the possibility of conducting joint exercises and training for naval SAR, and also the issue of providing assistance to civilians during natural disasters.

The Russian media has written little thus far on what it means to have a military delegation visit the North Korean capital.  However, AP asked Aleksandr Golts for comments, and this is how the wire service summarized them:

“Military expert Alexander Golts said North Korea’s goal in inviting the Russian military could be to assuage fears of instability as Russia is considering building a natural gas pipeline through North Korea.  The pipeline is expected to be one of the main topics of Kim and Medvedev’s talks.”

“Golts said it was highly unlikely Russia would renew arms sales to North Korea, which would not be in its interests as a participant in the six-party talks.  He also noted the low level of the Russian delegation, which is led by the commander of Russia’s eastern military district.”

One might suppose it’s equally possible the North Koreans wanted the Russian military to visit Pyongyang as part of its quid pro quo for considering a gas pipeline over its territory to South Korea.

Arms sales seem unlikely, but probably because Moscow’s no longer in the game of providing free military aid.

Admiral Sidenko is a lower level visitor, but it’s traditional for Moscow to send proximate regional commanders on such visits.  MD commanders can be precursors to General Staff Chiefs and Defense Ministers, and higher-profile military relations generally.

It’s almost impossible to know when the DPRK is involved, but this first interaction in nearly ten years automatically means something’s afoot.  The participants themselves probably don’t know where a bit of diplomatic, economic, and military activity will lead.