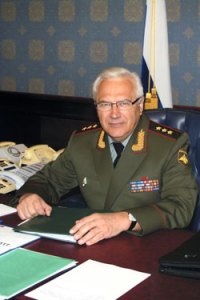 One would like to get off the GRU topic, but we have to follow the news to some extent.  General-Colonel Shlyakhturov not only spoke in advance of the November 5 military intelligence anniversary, but actually posed for a photo sporting a smile and his third star.

We don’t learn much here.  There are confirmations of what we’d already heard and read recently, or even long ago.  The GRU’s adapted for new missions, but keeps the old ones.  The threat from Georgia is emphasized as in previous years.  Military intelligence still falls under the Genshtab.  Shlyakhturov admits to restructuring and reducing, but insists the GRU’s still a “full-service” intelligence agency.  Spetsnaz has gone to the MDs, but the GRU still has a train and equip role.  Shlyakhturov hints that military intelligence is still very interested in foreign technology.

Interviewed in Rossiyskaya gazeta, the GRU Chief tells the paper how much times have changed, and the military intelligence agency now talks in terms of many-sided and multivector threats, rather than the “probable enemy.”

Shlyakhturov expounds on how terrorists and extremists pose the “greatest danger,” and the GRU monitors the situation in regions, like Georgia, from which this danger may emanate.  He’s quick, however, to deny that Russian special services have engaged in any subversive activity whatsoever against sovereign Georgia.  But, he says, the GRU will provide timely warning to the country’s military-political leadership if Tbilisi prepares “new military provocations against Russia and its regional allies.”  Changing tack, Shlyakhturov stresses that the GRU puts great stock in cooperating with special services of other countries to get threat information.

The GRU Chief says the agency is focused on “new” issues like economics, natural resources, and nuclear proliferation.  But it hasn’t lost focus on the disposition of foreign armies and armaments in different theaters of military operations and other issues that affect the employment and development of Russia’s Armed Forces.

Asked about reporting to the president, Shlyakhturov emphasizes that, as always, the GRU reports directly to the Defense Minister and Genshtab.  But the GRU’s most important documents still reach the president, prime minister, and Security Council, and influence Russia’s foreign and defense policies.

Shlyakhturov says the GRU has redistributed its efforts to focus on regions posing a threat to Russia’s interests and security, “hot spots” where terrorists and extremists operate, and crisis zones where international stability is threatened.

The GRU Chief admits there has been a reorganization and reduction in his agency.  As he puts it:

“Here’s the main thing you need to understand:   the changed world situation objectively required adjustments in intelligence priorities and their implementation mechanism.”

He notes, however, that the GRU still has operational, technical, information-analytical, and support sub-units as well as what he claims is a very spartan central apparatus, or headquarters staff.

Spetsnaz has, Shlyakhturov admits, gone to the MDs, fleets, and VDV, but he says they’re still part of operational intelligence, and the GRU provides their doctrine, training, and equipment.

Finally, he says the GRU remains interested in foreign technology developments, and its work here supports R&D efforts, the OPK, and the state program of armaments.