Another Angle on Apartments 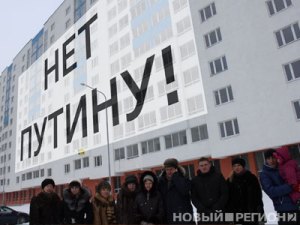 Here’s a different angle on why finished military apartments are unoccupied.  Last week Novyy region told the story of how apartments for military men in Yekaterinburg got tangled up with apartments for private buyers, leaving the latter standing in front of a huge sign saying “No to Putin!” and vowing not to vote for him on March 4.

The tale goes like this.  In 2005, the Defense Ministry engaged the Megapolis construction-investment company to build a 254-unit apartment building for military unit 61207, which looks to be a nearby Railroad Troops brigade.

The building was supposed to be ready in 2008, but construction dragged out, reportedly as a result of rising costs.  To complete its work, Megapolis said it needed to sell some of the apartments which it did.  These civilian owners, however, have keys to apartments they can’t occupy.

As a result of the dispute with the company, the Defense Ministry has refused to sign commissioning papers for the building, or turn on the electricity and gas.  The private owners have appealed for help at every possible level, and are now demanding that Defense Minister Serdyukov and Prime Minister Putin intervene.  In a statement to the media, the frustrated owners said:

“We shareholders, as consumers, legally paid for our apartments several years ago.  We don’t have any relationship to the Defense Ministry or the Megapolis company, but because of their dispute we can’t get into our own homes.”

“It seems the building was fully constructed in December 2011, live it up, rejoice.  But the bureaucratic procrastination arises.  That is the system developed, among others, by Vladimir Putin simply doesn’t want to work for the good of the people.  So the question arises — why should we vote for Putin?”

This scenario of Defense Ministry contractors selling some apartments on the open market has produced similar confrontations in several cities.

No word on how the servicemen are faring in the wait for their apartments.  Presumably they’ve remained in whatever service housing they had, and can’t be dismissed until they take delivery of their apartments.