Not a Fish, But a Crawdad (Part I)

It’s nice when you send yourself on a sabbatical.  But it’s terrible when your first post of the month doesn’t come until the 24th.  Seriously, this author should be flogged for neglecting the reader.  And he isn’t exactly prepared to dive back into frenetic posting either.  Only to hang more text out here now and again. 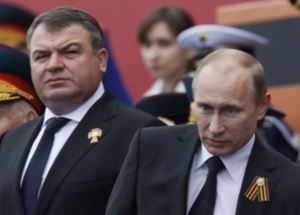 This topic and title were stolen from Topwar.ru.  The site picked up on Kommersant’s examination of why Anatoliy Serdyukov was one of only five ministers to retain his post in the first Putin 2.0 government.

Kommersant claims Serdyukov came somewhat close to being retired in December when, at then-Prime Minister Putin’s behest, FSB Director Bortnikov searched out potential replacements.  Bortnikov looked at Rostekh’s Chemezov, Roskosmos’ Popovkin, and Deputy PM and OPK steward Rogozin.  The former pair convinced Putin of the “inexpedience” of making either of them Defense Minister in Serdyukov’s place.  Rogozin reportedly was willing, but, of course, already had a higher-ranking post.

Kommersant’s Ivan Safronov cited Aleksandr Kanshin and a Defense Ministry apparat source to the effect that Putin decided it’d be better to have Serdyukov see the military reform process through to its conclusion.

For its part, Topwar.ru also attributes Serdyukov’s “unsinkability” to a desire to avoid changing leadership in the midst of reform.  It also writes that Anatoliy Eduardovich turned out to be, at least in some ways, the best available and most willing candidate.  Topwar sums Serdyukov’s position up with this adage:

“When there aren’t any fish, even a crawdad is a fish.”

But Anatoliy Rak isn’t likely to replace Taburetkin as a nickname for the Defense Minister.

The most interesting part of Topwar’s account, however, may be the large number of commentaries, which we’ll look at in part II of this post.