The nine-minute video of Putin’s introductory remarks provides a chance to catch up on the players.  There are, of course, many changes of late.

This photo lets us survey everyone (even if only the top of a head or partial face in some cases).

From the left, to Putin in the center, to the extreme right: 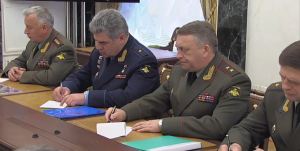 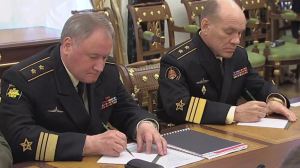 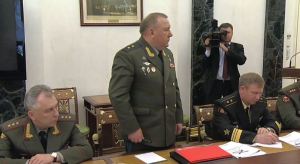 Not a New Face

In some sense, maybe it is a new face, or at least a reworked one.

We can’t leave this visite de visages (?!) without observations.

The Navy’s top ranks have been cleared.  Its new leaders are pretty junior.  With Chirkov moving up to CINC, Kravchuk is probably acting and set to become Baltic Fleet Commander.

The same thing might be said about the Air Forces with one-star Bondarev in charge.  He should be promoted quickly.  Recall he took a pretty hard line against Igor Sulim.

Gerasimov took over for Chirkin when he became Ground Troops CINC.

Karakayev’s got to wonder when he’ll get his third.  Ostapenko probably knows Karakayev will get another before he does.

Sidorov is apparently filling in for Eastern MD Commander, Admiral Konstantin Sidenko at this session.

This entry was posted in Military Leadership, Serdyukov's Reforms and tagged Vladimir Putin. Bookmark the permalink.

One response to “Face Recce”