Some significant news from late June and early July, largely (or entirely) overlooked by Western observers . . .

According to Mil.ru, uniformed and civilian Defense Ministry officials, industry representatives, and journalists were present for the test range ceremony.

The delivery followed the MOD’s announcement last month that Iskander-M system components will no longer be supplied separately to the army, only in “brigade sets.”  The military department also reported a “long-term” contract for deliveries of the missile system until 2017 was concluded with the producer. 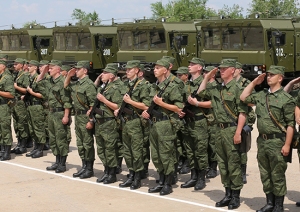 Shoygu reiterated that the MOD intends to reequip all ten Ground Forces missile brigades with Iskander-M before the end of 2017.  Ten brigades should deploy at least 120 missiles, not including reloads.  The Iskander-M is the only weapons system to be 100 percent procured before 2020, according to the MOD’s recently publicized Action Plan.

At Kapustin Yar, Iskander-M designer Valeriy Kashin of the Kolomna Machine-Building Design Bureau told reporters the military will receive another “brigade set” before year’s end, according to Nezavisimaya gazeta and Komsomolskaya pravda.

But completing the military’s order in less than five years could prove difficult for Russia’s defense industries.

NG reported Kashin said enterprises working on the Iskander-M have to “intensify” their activities several fold to meet the MOD deadline.  Seventeen specialized manufacturers are scheduled to upgrade and retool under a 40 billion ruble ($1.2 billion) investment effort.

However, actual reconstruction of production lines will not begin until 2014, according to online daily Vzglyad.

Shoygu told those in attendance at Kapustin Yar the most important step now is establishing the “essential infrastructure” for the deployment of new arms and equipment. He reemphasized this in a 1 July MOD videoconference by calling for special attention to synchronizing the delivery of weapons with the construction of bases and other support infrastructure where they will be deployed (and with the training of those who will operate them).

The defense minister stated that the MOD currently awaits completion of military construction projects worth 314 billion rubles ($9.7 billion). He said he wants the backlog eliminated before November.

An NVO correspondent present at Kapustin Yar reports that the just delivered Iskander-M brigade’s new facilities will be complete in September.

The newest Iskander-M brigade is likely intended for the Southern Military District, which presently only has one battalion of the new missiles.

Shoygu is right to focus on arranging the appropriate infrastructure for Russia’s new armaments because it has traditionally neglected support and lifecycle investments in its military equipment.