Actually, one reaction . . . a succinct editorial from Vedomosti capturing many good points with few words. 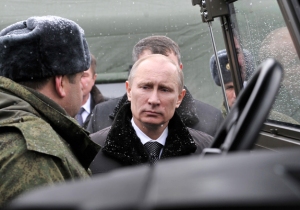 Here’s Vedomosti’s thinking on the sessions:

“Vladimir Putin conducted an intensive series of defense-industrial meetings.  During the trip to Olympic Sochi, the president in turn reviewed the problems of the development of aviation, the fleet, Space Defense Troops [sic] and the Missile Troops of Strategic Designation.  The fact that the discussion of military issues was raised to the highest level, signifies, probably, both the depth of the problems, and the priority of the subject.  The rational use of colossal resources was discussed:  expenditures on defense rose from 600 billion rubles in 2003 to 2.3 trillion rubles in 2013, and the general volume of the State Program of Armaments to 2020 is 20 trillion rubles.”

“These meetings affirmed:  Recent bureaucratic and staff [apparat] decisions, including appointment of a new minister of defense and a “military-industrial” deputy prime minister, did not solve the systemic problems of rearming the army and the quality of work of the domestic VPK.”

“The domestic VPK’s development is frozen, it needs foreign scientific and design developments — both dual-use and exclusively military, observes the director of the Center for the Analysis of Strategies and Technologies Ruslan Pukhov.  These demands can hardly be satisfied because of constant altercations with Europe and the USA on foreign policy issues.  Moreover, the objective requirement for technological cooperation will contradict Defense Minister Sergey Shoygu’s announced course of refusing imports of foreign armaments, combat equipment and support means (the purchase of the “Mistrals” is the exception proving the rule).  Of course, it is possible to hope that intelligence agents will acquire the needed technologies, as it was in Soviet times.”

“However, even this will not quite forestall the lag:  the institutes and specialists who provided the correct implementation of foreign technologies have been lost.”

“There is still a key question requiring a strategic decision at the highest level, — what is more important:  production of the maximum possible quantity of combat equipment or the training of professionals capable of using the most complex armaments, including foreign-produced ones.  For now, judging by Shoygu’s announcement on the preservation of conscript service, at the top they are inclined toward extensive development, toward employing unpaid labor, the use of which in the army turns into huge losses for households and the economy as a whole.”

“The personal participation of the president is essential in the resolution of conflicts between those who order and suppliers of armaments.  The latter in the absence of competition between various design bureaus and factories (it, as is well-known, existed in the time of the USSR and was one of the engines of the country’s technological development) have become monopolists, not interested in raising quality.  They are sure that the armed forces will buy their products, and know, that in case of disagreements with the military, the directors of state companies from among the closest associates of the first person will turn up on their side.”

Lots of thoughts and propositions for discussion and debate.