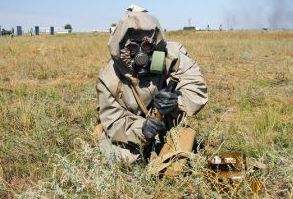 “Development of the troops of RKhB defense is currently directed at supporting conditions for an adequate response to all possible threats — radiological, chemical, and biological.”

The RKhBZ Troops are capable of completing missions for the Armed Forces and the state as a whole, according to him.

“One should note that just in 2014 alone ten regiments of RKhBZ were formed in the composition of combined arms armies.”

At the same time, the TO&E structure of the four independent RKhBZ brigades of the military districts was “optimized.”  That means, of course, reduced, cut, slashed, etc.

“In 2016-2020, the composition and TO&E of formations, military units and organizations of the RKhBZ Troops will improve with the goal of guaranteeing fulfillment of RKhBZ missions for Armed Forces groupings in armed conflicts and local wars, eliminating the effects of emergency situations, and conducting research in the applied sciences (chemistry, biology, biochemistry, genetics, biotechnology).”

Mil.ru also noted that RKhBZ formations, units, and organizations will undergo a transition to new org-shtat structures as they receive new types of weapons and equipment.

The shift from brigades is creating regiments that aren’t really “new.”  It’s a reshuffling of existing RKhBZ units to integrate them into Russia’s combined arms armies.  They will be army- rather than MD-level assets.

The “new regiments” are rather sparse.  Most press indicates they will have about 300-600 personnel and 100-200 pieces of equipment each.  In Soviet times, a combined arms army had several RKhBZ battalions including recon, protection, decon, flamethrower, and smoke. 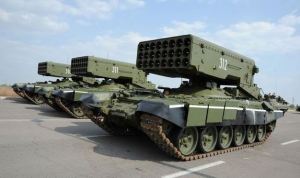 Perhaps RKhBZ is returning to army-level control because of the growing role of thermobaric rocket launchers like the TOS-1A in Russia’s fire support plans.