On 2 September, TASS reported Almaz-Antey delivered its ninth “regimental set” of S-400 / Triumf SAMs “ahead of schedule.”  The agency cited General Director Jan Novikov who claimed his company will send two more “sets” to the military before next year.  They will be numbers ten and eleven.

But those late year deliveries have a way of sliding to the right. 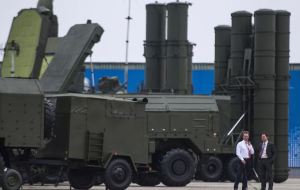 Novikov said the most recent “set” wasn’t due until November under the delivery plan.  He indicated the S-400s and associated equipment were sent to the “test range” — Kapustin Yar — where all “delivery-handover tests” were conducted successfully.

Writing for RG, Yuriy Gavrilov reports that, to meet the demand for the S-400 and S-500, Almaz-Antey has a robotic microelectronics production line for SAMs in Omsk.  This week the firm is also supposed to open a robotic lathe and milling line at the same facility.  Novikov reportedly said it will increase productivity in priority areas by a factor of 12.

Gavrilov writes that the new “set” is bound for Moscow.  It will make a fifth red pin in a blob of four currently around the capital.  Twelve “sets” are supposed to defend the skies of the “central administrative and industrial region” by 2020.

That count of nine S-400 “regimental sets” is intriguing.

By last year’s information, this should be ten, with the delivery to Kamchatka being the ninth.  But apparently not.  So which of the nine red pins is wrong (if any)?  It might be Novocherkassk, but some recent sources place this “regimental set” at Novorossiysk. Which begs its own question:  will the Defense Ministry shift them to Sevastopol eventually?

Also, there’s no indication yet of where “sets” ten and eleven (or eleven and twelve?) could go.

How do the overall numbers look?  If the fifth “set” for Moscow is actually the ninth overall, we’d expect a total of 19 regimental sets (based on General-Major Demin’s September 2014 statement that 12 more would be deployed).  If it’s actually the tenth, then a total of 20.

Both possibilities get close to the 56 S-400 battalions projected under the GPV. If all “sets” after Kamchatka have three battalions, they might get between 50 and 52 battalions.