Is the Russian MOD’s procurement declining?  It’s difficult to say, but a quick survey seems to show it hasn’t, at least not yet or by much.

The reporting comes from Krasnaya zvezda for 2015 and 2016, and from TASS and Bmpd. 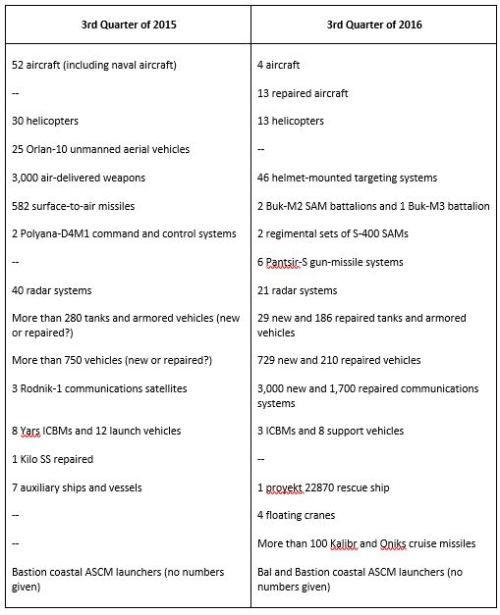 Year-on-year in the third quarter, procurement of aircraft and helicopters appeared down.  Purchases of air-delivered ordnance were higher in 2015 because the MOD needed to replenish stocks of missiles, rockets, and bombs expended in Syria.  Deliveries of ICBMs and ships were lower in the quarter just completed.  But the navy received substantial numbers of new cruise missile systems.

The MOD reported that 62 percent of the state defense order (GOZ) was complete in the third quarter.  It also said the armed forces’ inventory of weapons and equipment is now 48 percent modern.

This week Sergey Chemezov, head of government-owned defense industrial conglomerate Rostekh and friend of Putin, echoed the president’s recent warning to firms to plan for a time without large military orders.  Chemezov said Rostekh believes GOZ procurement will peak in two years and be no more than 50 percent of its total output by 2025.

3 responses to “Defense Procurement in Decline?”