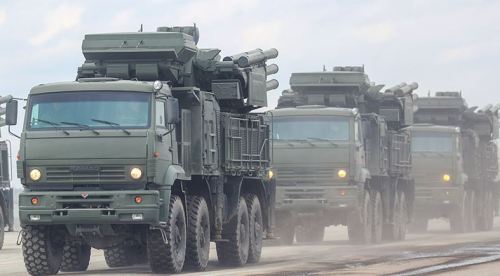 Izvestiya reports the Russian MOD plans to increase the mobility of its strategic air defenses.  The newly-established 24th Air Defense Brigade is the model. Formed in late 2016, this Abakan-based brigade just completed its first live firings of the S-300PS on the range in Astrakhan.

The brigade deployed 100 pieces of equipment over 4,500 km for practice in repulsing a “surprise mass air attack” by the notional enemy.

According to Izvestiya, new air defense brigades are supposed to be “highly mobile formations, capable of deploying hundreds of kilometers and establishing an insurmountable barrier against aircraft, cruise missiles, and UAVs in a matter of hours.” They will be equipped with S-400 and S-300 SAMs, Pantsir-S gun-missile systems, and Nebo-M radars.  The mobile brigades will reportedly protect more territory while saving money.

Russia’s independent air defense regiments have traditionally been dedicated to particular facilities or regions.  They employ tactical maneuverability but only within the confines of a larger positional defense.

“The appearance of the S-300 and S-400 seriously changed the situation.  These SAMs gave air defense high mobility.  New brigades could be deployed on a threat axis not just by their own means of transport, but also by ships or by VTA aircraft.”

Not to mention by rail too.

Gorkov claims the idea for more mobile strategic defense dates to the early 1990s when the S-300 was widely deployed.  He states that the 14th Mobile Air Defense Division, based in Ruza to the west of Moscow, deployed as far as Rzhev, Pskov, Smolensk, and Novgorod before it disbanded.

Abakan is capital of Khakasiya in Western Siberia.  Pretty remote as possible theaters of war go.  Its closest neighbors are Kazakhstan, China, and Mongolia.  It’s not even on the Transsib, but it connects via Tayshet.

A VKS Main Staff source says the next mobile air defense brigade will be Tiksi in Russia’s Far North.  Road and rail are, of course, not good options for Tiksi.

A push for more mobile air defenses is logical given the Russian military’s increased emphasis on strategic reinforcement in recent years.

Abakan may be off the beaten track, but it makes some sense because the Central MD is Moscow’s reserve for potential conflicts in the east, west, and south.