The Russian Navy is beefing up its Mediterranean presence. Recently, it announced its intent to increase the contingent from 10 to 15 ships.  This greater Med activity is both cause and effect of the navy’s effort to revivify its Black Sea Fleet (BSF), virtually moribund just a few years ago.

Ancient Smetlivyy returned to Sevastopol on June 3.  The venerable ship has served in the BSF since 1969.

Admiral Essen fires Kalibr on May 31

Admiral Essen and Krasnodar each fired two Kalibr (SS-N-30) land-attack cruise missiles at Islamic State positions near Palmyra on May 31.

Other BSF units — Admiral Grigorovich, Proyekt 21631 Buyan-class missile corvettes Zelenyy Dol and Serpukhov, and submarine Rostov-na-Donu — fired Kalibr missiles at targets in Syria from the eastern Med in 2015 and 2016.  Prior to this, the Russian Navy lacked a land-attack capability in the Med, and used surface combatants from its Caspian Flotilla to launch Kalibr missiles.  However, those weapons had to overfly Iranian and Iraqi territory to reach Syria.

On June 6, Interfaks-AVN reported that the Russian Navy will not cut the cruise missile strike capabilities of its “permanent operational formation” in the Mediterranean, according to a source “familiar with the situation.”  So there is apparently no plan for Admiral Grigorovich, Admiral Essen, or Krasnodar to return to Sevastopol soon.  They joined the Russian Med formation in early and late April and mid-May respectively.

Not a Large Formation

Russia’s current Mediterranean force is mistakenly called a squadron (эскадра) like its Soviet-era 5th Eskadra predecessor.  However, the Russian Navy says its Med presence is a formation (соединение), not a large formation (объединение).  A formation is typically naval ship division (дивизия) of 5-10 major and minor combatants with an O-6 in command.

A large formation, by contrast, is a major fleet component — a flotilla or eskadra, and it is commanded by an O-7.  Such a command typically is a stepping stone to fleet commander.

In contrast to today’s formation, the 5th Eskadra normally had 40-50 ships in the Med every day at the height of the Cold War in the 1970s and 1980s.  That’s probably more than the entire BSF today.

After the U.S. Tomahawk strike on Syria’s Shayrat air base on April 7, Vladimir Pavlov wrote disparagingly of Russia’s declining capabilities in the Med.  Pavlov concluded that the brief and ill-fated deployment of Admiral Kuznetsov to the eastern Med this winter left those waters empty for the U.S. (as if the Russian carrier would have prevented American action).

Pavlov noted that the navy had to rely on “1st and 2nd rank” ships from other fleets, the Baltic in particular, to maintain its Med formation.

Things look a bit better now with two Proyekt 11356 frigates in the BSF.  The third, Admiral Makarov, is now supposed to join the fleet before the end of this year.  The fleet has its full complement of six new Proyekt 636.3 submarines.  Missile corvettes Zelenyy Dol and Serpukhov entered the order-of-battle in late 2015.  More of them might follow.

The second Proyekt 18280 Yuriy Ivanov-class intelligence ship Ivan Khurs will reportedly go to replace Liman, which sank near Istanbul after colliding with a Turkish freighter on April 27.

The rest of the BSF surface fleet, however, is old.  Flagship Proyekt 1164 Slava-class CG Moskva will be due soon for overhaul and modernization.  Its other combatants, small missile ships, and amphibs are largely from the 1970s and 1980s.  These older ships patrol the Med, but to return to port for maintenance often after brief sorties.

Russian BDK-151 Azov in the Straits

The Russians originally formulated plans to renew a continuous naval presence in the Mediterranean during 2011-2012, primarily out of their concern with the Syrian civil war and thinking that they might intervene eventually.

At the time, Defense Minister Sergey Shoygu acknowledged that overdue repairs and slow ship construction were hindering the navy and the new naval presence in the Med.  But five years hence, these problems have been overcome to a large extent. 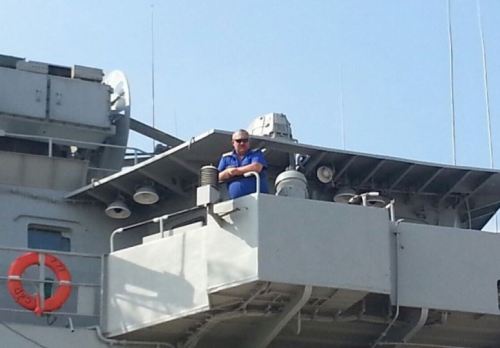 Yasnitskiy on the wing bridge

He is a 47-year-old third generation officer born in Severomorsk — the Northern Fleet headquarters, according to Ruinformer.com.  After commissioning, he served on a Black Sea Fleet destroyer before becoming executive officer, then commander of Baltic Fleet frigate Neustrashimyy.  He was to command the first Improved Sovremennyy-class destroyer Vnushitelnyy, but it was never finished. Instead, he served as chief of staff for a ship brigade.