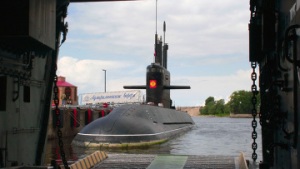 This morning RIA Novosti reported on a familiar topic — the conflict between planned acquisition embodied in the State Program of Armaments, 2011-2020, and the Russian OPK’s capacity and capability to deliver it.  In this case, new diesel-electric submarines from St. Petersburg’s Admiralty Wharves.  Also familiar is one reason for the bind — a lingering priority on production for sale abroad.

A highly-placed OPK source tells the news agency that the GPV’s plan for conventional submarine deliveries might not be fulfilled due to Admiralty’s heavy load of orders.  The Russian Navy is reportedly supposed to get 20 new diesel-electric boats by 2020, and Russia also has ten foreign deliveries scheduled.  The OPK source notes that Admiralty has become a sole source for conventional subs, and he calls for shifting some sub production to Nizhniy Novgorod and Komsomolsk:

“In view of the large volume of new submarine construction for the Navy, and also for export, it’s essential to diversify production, utilizing, for example, the capacity of ‘Krasnoye Sormovo’ Shipbuilding Plant in Nizhniy Novgorod and the Amur Shipbuilding Plant in Komsomolsk-na-Amure.  Otherwise the state program in the diesel submarine construction area could be disrupted.”

RIA Novosti notes “Krasnoye Sormovo” built plenty of Soviet submarines, 280 in all, including 25 nuclear-powered ones.  Its last boat was a diesel-electric for China in 2005.  The plant also outfits Russian Navy and export subs with torpedo- and mast-related equipment.

The article also speculates that construction of French-designed Mistral helicopter carriers could be problematic if Admiralty is selected.  The shipyard is reportedly planning on new construction space on Kronshtadt for this reason.  The OPK source says Mistral would be Admiralty’s main concern, and occupy its main capacity and personnel.  So, he continues, it’s logical to send some orders (i.e. submarines) to other factories that have the capabilities.

“In the event new contracts are signed for sub construction with Venezuela and Indonesia there will be an obvious problem with inadequate buildingway space, and then a backup could be required.”

RIA Novosti notes rather dryly along the way that no Russian GPV has been fulfilled completely because of the country’s insufficient modern industrial capacity.

One wonders what, if any, work and investment would be required to bring “Krasnoye Sormovo” and Amur back into the sub-building business.