Krasnaya zvezda called this story “Year of Accomplishments,” but might have called it Day of Military Acceptance . . . .

President and Supreme CINC Vladimir Putin visited the NTsUO for the first time on 18 December.  He familiarized himself with the new national command center and its capabilities for accommodating and coordinating the work of the military and other high-level government organs. 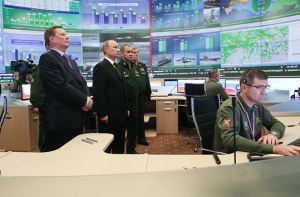 Putin’s seat is in the upper balcony opposite the big screens.

Another View of the NTsUO (photo: Mil.ru)

The first real order of business, however, was reviewing fulfillment of the State Defense Order in 2014.

Recall this year the political leadership and Defense Ministry launched a quarterly exercise of enumerating what was procured the previous three months on what they call the Day of Military Acceptance (День военной приёмки).

It’s almost as though the Kremlin is irritated someone has audaciously suggested that Russian output of new armaments and other military equipment hasn’t been especially impressive in years past.

“At recent meetings in Sochi we already noted that practically all Gosoboronzakaz tasks for this year have been fulfilled, and its general volume increased by almost half in comparison with 2013.”

Putin went on to say that 4,500 weapons, military, and special equipment were acquired in 2014, including:

It isn’t clear which four submarines the Russian president means.  Probably the third Borey-class (proyekt 955A) SSBN Vladimir Monomakh and Improved Kilo-class (proyekt 636.3) diesel-electric Novorossiysk.  But Borey unit 2 Aleksandr Nevskiy was accepted late last year.  And it would be a stretch to accept the next two Improved Kilos before January.

KZ then turns to Defense Minister Sergey Shoygu and his words before an expanded MOD collegium in the NTsUO.

He said Russian strategic forces received 38 intercontinental ballistic missiles in 2014 — 16 ICBMs and 22 SLBMs — most of the latter placed on Borey unit 1 Yuriy Dolgorukiy.  He claimed that 56 percent of Russia’s strategic weapons are now “modern.”

He expounded a bit on the Supreme CINC:

“The Air Forces received 142 aircraft, of which 53 are multipurpose Su-30 and Su-35S aircraft systems, 16 Su-34, 28 transport and training aircraft of various types, 18 modernized fighter-interceptors MiG-31BM, 135 helicopters, including 46 combat and 72 transports.”

Mil.ru posted the videos and texts presented to Putin and the collegium.  They address all of the priority tasks of the military this year.  One, of course, is “Equipping with Modern Armaments and Military Equipment.”  It provides the following data (different from Putin and Shoygu):

This account mentions that the serviceability of weapons and equipment rose from 80 to 85 percent.

Accepting submarines at year’s end seems to enable Moscow to claim that they were accepted, or to count them as “produced,” in two years rather than just one.

All in all, more weapons and equipment were acquired in 2014 and 2013 than in 2012, 2011, etc.  But it’s a little like comparing something and nothing. Serious procurement on a fairly wide front didn’t begin until after 2012.

The Defense Ministry announced in late October that Russia’s new National Defense Command and Control Center (NTsUO or НЦУО) in the old ground troops command building on Frunzenskaya embankment will be fully operational by December 1.  It has operated on an “experimental combat duty” basis since April.

You can read about the NTsUO here and here.  Or you can look at General Staff Chief Valeriy Gerasimov’s description of what it will do.  It’s an incredibly expansive list of oversight, monitoring, and decision-support functions for state defense in accord with the Defense Plan.  As Gerasimov indicates, the NTsUO will inform Russia’s leadership about what’s happening in the world, the country, and the Armed Forces, and propose alternative courses of action in response to changing situations.

The NTsUO will be the apex of the military command and control system. Military includes not just Defense Ministry forces, but also Russia’s numerous militarized ministries and agencies — FSB, FSO, SVR, MVD, MChS, etc.  And more besides.  But it’s not clear to what extent heavyweights like the FSB and MVD have invested themselves in the NTsUO thus far.

Overlooked in the NTsUO is an intent to give supreme commander-in-chief Vladimir Putin better control over his various siloviki in the event of a genuine internal threat to his rule, i.e. coup, “colored revolution,” Bolotnaya march, Maidan, etc.  The NTsUO appears to be something Gorbachev, Yeltsin, or even Yanukovych would have envied during their political crises.

The NTsUO and its chief may have usurped the role of spokesman for the MOD (which retains its official press-service).

So what about the NTsUO chief?

Mizintsev is a career staff officer with considerable time spent in tactical reconnaissance.  He was born in rural Vologda oblast on September 10, 1962.  He graduated from the Suvorov premilitary school in Tver in 1980, and the Kiev combined arms command school in 1984.

He commanded reconnaissance or motorized rifle troops up to battalion-level in the GSFG / WGF and Group of Russian Forces in the Transcaucasus.

He finished the mid-career Frunze Military Academy in 1996, and served as a “senior officer-operator” [watch officer] in the General Staff’s Main Operations Directorate (GOU) until 2001.  He returned to the schoolhouse and graduated from the senior-level General Staff Academy in 2003.

Mizintsev served as the chief of an unidentified GOU group through 2007. He then became chief of the operations directorate and deputy chief of staff for the Moscow Military District.  He likely came to the attention of Valeriy Gerasimov at this point.  Gerasimov commanded the district starting in 2009.

From 2010 to 2012, Mizintsev occupied the same post in the North Caucasus / Southern MD.

In August 2012, he became chief of the General Staff’s Central Command Post (TsKP or ЦКП) until it disbanded and he took over the NTsUO.

Mizintsev’s rise from O-6 was quick; he became a one-star in December 2011, then put on two-star general-lieutenant rank barely two years later.