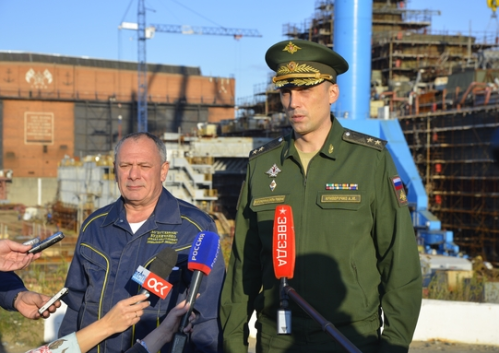 If we’re generous, we could say the Russian Navy got (or will get) five new SSBNs and two new SSNs — a grand total of seven — in the first two decades of the 21st century.

Now Krivoruchko says Sevmash will finish and deliver ten in the next five years.

The initial 955A — Knyaz Vladimir — is in trials and could be accepted in December 2019.

The first of the last two Borey-A SSBNs currently on the books — Imperator Aleksandr III — might make the 2024 deadline. But almost certainly not the other — Knyaz Pozharskiy.

So ten new nuclear submarines in Russia’s order-of-battle by the end of 2024 is certainly conceivable, but is it likely? Here are some difficulties:

Perhaps Krivoruchko’s message is just the MOD’s latest effort to hurry Sevmash along.

The extra two 955A SSBNs Krivoruchko mentioned, if built, would give Moscow a force of ten modern boats to split evenly between its Northern and Pacific Fleets.

In his short opinion piece, Klimov doesn’t systematically address the cost-benefit of Russia’s nuclear-powered submarine forces. But he has an opinion: their price outweighs their usefulness.

He’s not happy with what little he’s seen from the Borey and Bulava programs, but he seems to favor keeping a naval component in Russia’s strategic nuclear triad.

He’s not persuaded when it comes to SSNs.

Klimov states flatly that Moscow’s effort to modernize its third-generation attack boats has failed and it has turned instead to project 885/885M. But these fourth-generation subs are too expensive and too few in number. Producing them as an effective means of non-nuclear deterrence, Klimov writes, is beyond Russia’s economic capabilities.

While the 885/885M design might approach U.S. levels of stealthiness, they aren’t rolling out of Sevmash like sausages. Not even commissioned, Kazan will make two. Yes, two.

The U.S. Navy has had three Seawolf-class SSNs since 2005. It has 16 Virginia-class subs in service. Another is ready for commissioning. Nine, yes, nine are under construction. Ten Block V boats could be built in the 2020s. And the U.S. Navy also maintains a capable force of more than 30 Los Angeles-class boats. It has to. It confronts larger, more complex strategic challenges than its Russian counterpart.

From outside, we can only guess whether USN airborne ASW is as successful as Klimov claims. One would expect the FSB to inquire about his sources for this part of his story. Mind you, he was talking about P-3 Orion surveillance, not more modern and capable P-8 Poseidon aircraft.

That older combat systems have been used on the 885/885M, as he asserts, seems likely from past Soviet/Russian evolutionary practice.

Klimov’s recommendations, however, are more difficult to swallow. Redistributing resources from SSNs, which are becoming dolgostroi, to ground forces, surface ships, and naval aviation would be strange.

Spending less on subs in favor of the army could be a legitimate decision for Moscow to make, especially because the navy made out so well in GPV 2011-2020. But it also sounds like something green-uniformed guys in the General Staff might propose. It makes one wonder whether Klimov’s article was commissioned (by someone wearing green).

Proposing that money saved go to surface ships and aviation is puzzling. Sending more rubles down the surface ship “rabbit hole” is unlikely to produce better results. The Russian Navy has always been a submarine navy, and probably always will be (if it gets new submarines). Submarines suit Russia’s strategic situation and requirement to defend against seaborne threats to its continental theaters.

Klimov makes the valid point that Russia will need new weapons and systems for a true fifth-generation submarine. To put older ones into a new hull is to “lay down a growing lag” in the fleet, as he says.

But, from Moscow’s perspective, curtailing sub production risks falling out of the business altogether. Its industrial base for submarines isn’t doing well enough to take time off.

But Klimov’s article is Russian military journalism rarely seen over the past five years or so. He has dared draw conclusions (e.g. the failure of efforts to modernize aging third-generation boats) we haven’t heard from others.