The Navy Main Staff’s officially moved to St. Petersburg after several years of on-again, off-again plans and delays.  Pervyy kanal covered a Senate Square ceremony and the raising of the Andreyevskiy flag over Admiralty in a light snowfall last Wednesday.

Wonder if there’s a “for sale” sign on the building on Bolshoy Kozlovskiy in Moscow. 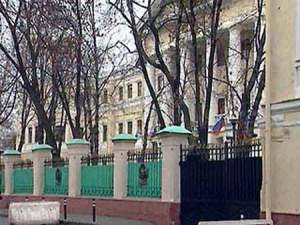 A Defense Ministry representative told RIA Novosti Friday that the main complex of the Navy’s Main Command has to be emptied before 1 June in connection with its move to St. Petersburg.  This means the Navy Main Staff building on Bolshoy Kozlovskiy.  The representative said 200 admirals and other officers have to head for the northern capital by the end of the month.

The source couldn’t say who will occupy the Main Staff’s old digs.  But other Navy Glavkomat buildings in Moscow aren’t being emptied yet.  These include the Navy Armaments Staff on Bolshoy Zlatoustinskiy, the Naval Aviation Staff in Skakovaya Alley, and the Rear Services Staff on Spartakovskaya Square.

RIA Novosti notes the back-and-forth, on-again / off-again nature of talk about moving the Navy’s headquarters to Piter.  Admiralty’s had a sign for several years saying it’s the home of the Navy Main Staff and Navy CINC.

The wire service failed to mention that Defense Minister Serdyukov has been solid all along, saying the transfer would happen eventually and gradually, even if his deputies or senior uniformed officers sometimes wavered on the issue.

Navy Still Not Moving to Piter (Yet)

A highly placed Defense Ministry source tells RIA Novosti there’s no final decision on moving the Navy Main Staff (NMS) from Moscow to St. Petersburg.  It’s been, of course, 3-1/2 years since the issue was first raised.

“There are two approaches.  The first is the Navy Main Staff remains in Moscow, and here the efficiency of resolving issues and tasks with the RF Defense Ministry wins and the second is the Navy Main Staff, with significantly reduced personnel, transfers to Saint Petersburg, where the scientific and shipbuilding base of the fleet is concentrated.”

According to this source, the pluses and minuses of both approaches are being calculated in the final phase of forming the command and control system of the Armed Forces.  The question of the NMS location is approached from the point of view that even temporary weakening in the command and control system for naval strategic nuclear forces (MSYaS or МСЯС) is unacceptable:

“The focus is placed on the effectiveness of the functioning of this system.  Whether the Navy Main Staff as just one attribute [of this system] transfers authoritative functions to St. Petersburg or remains in Moscow is not so important.  It’s important that the deployment location should be defended in a corresponding manner and not allow confusion in the general system of Armed Forces command and control.”

There is, according to the source, no doubt it’s essential to preserve the unitary structure of strategic nuclear forces command and control in the future:

“It follows that the Navy command in the form of the Navy Main Staff or, let’s say, a Navy department [департамент] is essential for coordinating the strategy of using the Navy in cooperation with the new regional commands [OSKs].”

He adds that, while OSKs West, South, Center, and East are complete, it still remains to distribute precisely the command and control functions for general purpose forces and strategic nuclear forces.

RIA Novosti’s interlocutor makes all this sound like the main issue may be less the move itself, and more one of figuring out the relationship and responsibilities of the now stronger and more significant MDs / OSKs and the somewhat diminished service main commands (Glavkomaty).  Perhaps the Navy Glavkomat is arguing with OSK West and OSK East over what is part of the strategic Navy, or supports strategic naval operations.

And Interfaks also has an item today saying that the Defense Ministry has ordered the NMS to prepare to move to St. Petersburg.  This came from an informed source in the Navy Glavkomat.  The written order contains no precise date for the move, but the source thinks the “active phase” of relocating will begin in July.

The Navy Main Staff and the Petersburg Move

“The transfer of the Navy Main Staff to Petersburg is put off to an undetermined time.  Now the main efforts are concentrated on a radical optimization of its structure, which must be finished before year’s end.”

“At present the process of forming a compact command and control structure, which, being located in Petersburg, will be as close to the fleet as possible, is ongoing.”

The source says the group of staff officers who moved to Petersburg at the beginning of 2010 will stay in Admiralty and act as a Glavkomat representative.  Navy CINC Admiral Vysotskiy has an office there, and he routinely visits St. Petersburg.

So maybe the ‘radical optimization’ [i.e. cut] in the Navy Main Staff is not going as smoothly as hoped back in the winter.  Recall there were unofficial hopes and reports that the staff would be cut by mid-summer allowing the move to start at that time.

Press coverage of Navy Day (25 July) was replete with interesting stories of plans to revivify Russia’s Kirov-class CGNs and even the Orlan-class wing-in-ground effect vehicle.  There was more talk about moving the Neustrashimyy and Yaroslav Mudryy to the BSF.  Navy CINC Admiral Vladimir Vysotskiy’s interview with Ekho Moskvy, however, didn’t get a lot of attention beyond a couple RIA Novosti and ITAR-TASS sound bytes.

Discussing development of Russia’s fleet of the future, Vysotskiy emphasized the long lead time required to get it:

“Today it takes 10-12 years to get some kind of definite design.  We understand that we have to go according to some operational-tactical requirements, perhaps even operational-strategic ones in this design, of course.  So, it means the development or construction of a series is approximately another 5-7 years, up to 10 years.  Perhaps more, the service life of the design is 20 to 25 years.  In other words, if today we make a decision on constructing some full-scale fleet, then we have to understand we’ll receive this fleet in about 50 years.  Well, at a minimum, beginning from the main component in 35 years.”

Vysotskiy’s comments on Bulava were also captured by the wire services:

“Well, the question which we, military men bearing certain responsibility for this, of course, well, honestly speaking, we are already tired of answering because there is one cause — a deep, I underscore, failure of primary production technology for such expensive missile systems.”

“We all very simply understand well:  when we began to arrange the process of our work incorrectly from the beginning, and here everything was not done as it needed to be.  Here, of course, we’ll get big problems in the process of the work itself.  This means, in my view, in the last 2 years, a serious move in the direction of us receiving this system has been made nonetheless.  But we need to understand that getting this system in its current form is not the final step of the work.  But we have a fair chance all the same to complete this work successfully, well, so we’ll say, in the course of the coming year.”

And Vysotskiy said lots of other interesting things that went unnoticed.

He naturally supported Vice-Admiral Sidenko as Far East OSK Commander, saying it made sense and reflected the country’s maritime interests in the Pacific and Indian Oceans.

He connected the acquisition of the Mistral to drawing down mobilization resources in favor of permanent readiness.  He said PR units could be put on Mistral and the ship could be a mobile command point for an OSK’s inter-service grouping.  He defended turning abroad by saying it would take Russian yards 1.5 to 3 years to even prepare to make such a ship if they started today.

Vysotskiy wants the BSF to pick up the antipiracy load so the distant fleets don’t have to send their ships.

On the loss of the Kursk ten years ago, Vysotskiy said the accident started with a technical cause — errors in handling a peroxide-fueled torpedo — but there was an accumulation of mistakes, including organizational and command ones, that led to the tragedy.

Russia is working on its organizational and technical problems in SAR, both buying equipment and learning to use it abroad.  Vysotskiy cited an ‘absolute understanding’ on cooperation with foreign partners.

He was evasive on moving the Navy’s headquarters to St. Petersburg, saying a remote command and control point is there, and other steps in this direction are being taken.  But the overall military C2 reform has to be completed this year before he can really answer questions.

Lastly, on foreign bases for the Navy.  He’d like to have them, and there’s movement in this direction, at least compared with the recent past.  The Navy is working with a number of states to arrange for simplified port access for its ships in some strategic places, and it’s almost like having a base.