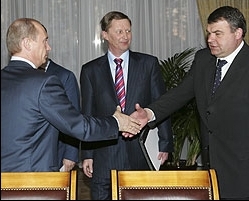 The fourth anniversary of Anatoliy Serdyukov’s appointment came and went quietly enough on 15 February.  But WikiLeaks has come through as if to mark the occasion.

On Friday, it posted an Amembassy Moscow assessment of Defense Minister Serdyukov a month and a half after he arrived in the “Arbat Military District.”  Mindful of hindsight bias, one can’t judge this cable too harshly.  But it’s an interesting retrospective on what was expected of the man going in, and what has happened since.

As stated all over the Russian media, Amembassy anticipated Serdyukov would impose discipline on the “Ministry’s notoriously loose financial control system,” and not otherwise initiate major changes.

“Serdyukov’s inexperience on military issues would undermine his credibility with the General Staff and other senior officers, hindering his ability to push through needed reforms.”

A bit silly in retrospect.  Yes, he had no credibility with the Genshtab, nor it with him.  But he didn’t care and pushed right through the Genshtab, cutting the Genshtab (it suffered first in the reforms) and building his own bureaucratic machinery in the Defense Ministry.

Amembassy claimed that Serdyukov dismissed then-Chief of the Main Directorate of International Military Cooperation (GU MVS) General-Colonel Anatoliy Mazurkevich, and that Serdyukov’s auditors might be driving other corrupt officers into resignations or dismissals.

The cable describes the Defense Minister aptly as a “detail-oriented micromanager and ruthless policy administrator.”

But what it doesn’t note (and what has become patently obvious over the last four years) is that the Defense Ministry, and the Russian military, is an unwieldy and untidy establishment not well-suited to micromanagement.  Talk about trying to turn an aircraft carrier on a dime . . . not gonna happen here.

A couple stories come to mind . . . Serdyukov trying to put new uniforms on the troops, one of his first initiatives.  Now maybe only 20 percent of the troops have them, and the parents of those that do say the new uniforms aren’t as good against the cold as the old ones.

Also, Serdyukov talking about one new brigade commander who didn’t implement his directives.  It’s a big country and a big army.  What Moscow says isn’t always relevant in Chita, etc.

Next, Amembassy summarized the views of Ivan Safranchuk this way:

“He thought the Ministry establishment would try to ‘outlast’ any reforms that Serdyukov sought to impose, with the brass counting on Serdyukov to adjust to their way of thinking — or at least to stay out of their way.  Safranchuk told us that former DefMin Ivanov ultimately had not made a significant impact on how things functioned within the Ministry, despite his reform efforts, and predicted the same fate for Serdyukov.”

This one turned out to be pretty wrong, didn’t it?  There may still be some elements awaiting Serdyukov’s departure and a return to the way things used to be, but too much has changed.  The military establishment can’t ever be exactly what it used to be.  And the brass was definitely no match for Serdyukov, and he didn’t stay out of their way, but rather sent many of them down the highway.  And this Defense Minister has had a greater impact in four years than Sergey Ivanov in nearly six.  Ivanov’s fate was not to be Putin’s successor, and to muddle around in his next job, i.e. First Deputy PM.  As for Serdyukov’s fate, we’ll have to see.  As for his impact, at least some is likely to be lasting.  How long?  Only until the next determined reformer arrives.  None of this is to say Serdyukov’s impact is all positive, mind you.  Some changes may have messed things up worse than they were.  But he got reform off the dime in a way Ivanov never dreamed.

Here’s video of Putin’s meeting with Ivanov and Serdyukov on 15 February 2007.

“Sergey Sumbayev, a former journalist with Krasnaya zvezda (Red Star), told us that management and accountability within the Ministry were dysfunctional and fostered inefficiency and corruption.  He referred both to financial accountability and responsibility for policy implementation.  Sumbayev thought the Ministry’s entrenched bureaucracy resisted, mostly successfully, institutional change, which generated considerable waste and delayed delivery of modern weapons systems to the armed forces.”

“. . . management experience and tenacious work ethic make [Serdyukov] the ideal ‘technical’ manager that the Ministry needs.  While acknowledging Serdyukov’s political connections, Sumbayev did not think Serdyukov harbored any political ambitions.  He was chosen mainly for his managerial expertise, loyalty, and willingness to please his political bosses.  Serdyukov could probably make progress in streamlining the Ministry’s management structure, reducing waste, and exerting more control over its financial accounting systems.  One year, however, would not be sufficient to accomplish these tasks.”

“Sumbayev speculated that keeping the General Staff off-balance and focused on internal matters over the next year was one of Putin’s objectives in appointing Serdyukov. In this respect, he suggested that Serdyukov had a mandate to shake things up in the Ministry without sparking too much discontent.”

“Serdyukov has his work cut out for him in bringing order to a Ministry badly in need of reform.”

Serdyukov’s made progress, but this final assessment probably remains true four years on.

Cablegate on the Mistral Sale

In case you missed it in Wikileaks, the U.S. Defense Secretary discussed many important topics with his French counterpart in early 2010, and France’s plan to sell the Mistral to Russia among them, though it may have been one of the less urgent issues.

What you read is the dialogue of allies respectfully sharing differing views of the situation and its significance.  It’s interesting for Defense Secretary Robert Gates to say it’s not Russia’s capability the U.S. worries about, but about sending the wrong signal to new allies on Moscow’s doorstep.  His French counterpart argues for Mistral as a tangible sign of the benefits of Russian partnership with the Western allies.  He concedes the ship is intended for power projection, but argues this single ship [well, two plus the plans for two more] won’t change Russia’s capabilities much given the poor condition of its naval production infrastructure.

18. (S/NF) SecDef expressed U.S. concerns about the Mistral sale to Russia.  He told Morin that because of Sarkozy’s involvement in brokering a ceasefire in Georgia, which Russia was not fully honoring, the sale would send the wrong message to Russia and to our Allies in Central and East Europe.

19. (S/NF) Morin told SecDef pointedly that he had pushed hard for the sale.  He conceded that it was indeed a warship for power projection.  But Morin asked rhetorically how we can tell Russia we desire partnership but then not trust them.  Morin told SecDef that he understood the U.S. position on considering Central and East European Allies’ concerns about the perceived threat from Russia.  Morin argued, however, that this single ship would not make any difference with respect to Russian capabilities, as Russia’s naval production ability was severely degraded.

20. (S/NF) SecDef replied that U.S. concerns were not about military capacity but about messaging.  Some allies, because of their past experiences, are still very concerned with Russia and are not sure how much to trust the West.  SecDef observed that Russian democracy has disappeared and the government was an oligarchy run by the security services.  President Medvedev has a more pragmatic vision for Russia than PM Putin, but there has been little real change.

One can’t avoid Wikileaks forever . . . you’ve already read about “alpha dog” Putin, and Medvedev who plays Robin to Putin’s Batman.  But not many media outlets picked up on Defense Minister Serdyukov’s story, but Argumenty nedeli did.

In early 2009, the Azeri Defense Minister reportedly shared details of his meeting with Serdyukov with the U.S. Ambassador in Baku.  Sufficiently lubricated after sharing two bottles of vodka, Serdyukov allegedly asked his Azeri counterpart:

This is really no more than anecdotal confirmation of what’s been known all along — Serdyukov was put in place by Putin, and he’s part of Team Putin.  While appropriately deferential and respectful of President Medvedev, Serdyukov is very unlikely to get in a situation where he might have to cross his mentors from Team Putin.  Medvedev himself is part of the Team writ large, but he’s from a different, and less influential branch.  So, the ruling tandem has a senior and junior member and everyone knows it.

Not exactly a revelation, but Serdyukov’s admission makes for a funny story, and no small embarrassment for him now in dealing with Dmitriy Anatolyevich.