The Year of Military Reform 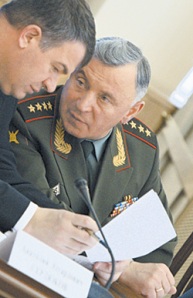 Nezavisimaya gazeta’s number one military story of the year is the achievement of the ‘new profile.’  NG concludes not just anyone could have introduced this year’s changes.  Serdyukov succeeded where a line of others before him failed.  And he did it like Peter the Great; he didn’t consult the boyars, he didn’t pay attention to seething discontent among the troops and dismissed officers, and he completely ignored experts and the military community.

He turned the General Staff into an obedient instrument by sweeping out opponents, then proceeded to put all military units into permanent readiness.  He reduced the officer corps from 355,000 to 150,000 in one year, and established a command pyramid by reducing generals, colonels, and lieutenant colonels and adding to the lieutenant ranks.  According to Makarov, all 142,000 warrant officers were either dismissed or took another posts, often as sergeants.

Makarov says one-third of officers will receive premium pay in 2010–this will be up to 75,000 rubles for a platoon commander and 200,000 for a division commander.  He says all officers will be paid on this scale by 2012.

The effectiveness of the reform was constantly criticized, especially when the year’s training results showed that 60 percent of the new brigades were rated only satisfactory.  Only 4 units got outstanding, and they were ships or submarines.

Makarov says reequipping the armed forces is the next fundamental task.  He calls it the most labor-intensive, “Firstly, we have started to equip the southern districts.”  Toward 2016, the army is supposed to have 30 percent modern arms, and 70-100  percent by 2020.

The Genshtab says 37,000 officers were placed outside the TO&E (without duty posts and much of their pay) to await apartments and dismissal.  It promises they won’t be dismissed without housing, but officers don’t believe this too much.  It was promised that the Defense Ministry would get 45,000 apartments in 2009, but it really received less than 30,000 by year’s end.  Another 45,000 are promised in 2010, but these plans are being frustrated, and this is quite an important affair for dismissed officers.