On 10 January, Interfaks-AVN reported that the Defense Ministry has sent the federal budget a fraction of an expected 10 billion rubles in proceeds from sales of its property in 2009, according to a Federation Council committee source.  The Audit Chamber expected 10.6 billion rubles, but only 1.5 billon has been forwarded to the budget.  The income was supposed to come from the sale of vacant land, unused property, and excess equipment.  So, either the sales did not produce the anticipated profits or corruption in the Defense Ministry drained them away.  The source said there was accurate accounting of what was to be sold, and what should be gained from the sales, and so there’s an obvious temptation to steal.

In a November Duma roundtable, the Deputy Chairman of the Defense Committee, Mikhail Babich said:

It doesn’t because pretty early on Defense Minister Serdyukov won a battle to keep this right inside his department.

Nezavisimaya gazeta’s Vladimir Mukhin picked up on this story yesterday.  He concludes right off that Serdyukov’s ambitious plans to profit from unused Defense Ministry property turned into a fiasco.  He notes the Defense Ministry hasn’t made a secret of this, saying on its auction site that more than half of planned auctions didn’t occur because of the lack of applications to participate.

Mukhin quotes Aleksandr Kanshin, chairman of the Public Chamber’s veterans, servicemen, and families committee, saying the unmet plan for selling excess military property (VVI) is more or less connected with last year’s economic crisis, but from the other side, it’s not really the Defense Ministry’s business to be salesman for state property, and military men have no experience, personnel, or resources for this.  Another interlocutor says there have been significant instances of corruption arising in the sale of VVI.

Simultaneously, the Defense Ministry’s Personnel Inspectorate and the Main Military Prosecutor (GVP) have launched a widespread anticorruption inspection under orders from Serdyukov.  The inspection covers Defense Ministry directorates, the armed services, branches, military districts, and fleets.  A law enforcement source told Interfaks the inspection aims to prevent crimes by officers and generals and will continue until 1 March.

The source said corruption and other offenses by several generals and senior officers had already been uncovered, and the central attestation commission might relieve them of their duties.  Offenses were noted in the VVS, VDV, Railroad Troops, and Ground Troops.

More than 40 percent of offenses by officers involved the theft of property or funds, and crime by senior officers is rising.  The GVP reported damages to the state from military corruption exceeded 2.5 billion rubles.

Krasnaya zvezda’s interview with the MVO military prosecutor is quite astounding.  He says he’s been implementing the national anticorruption plan since 2008, using an interdepartmental group, including “state security organ employees in the troops” [FSB officers] and command representatives.  So, in 2009, prosecutors and FSB officers investigated 190 cases.  Based on these, they gave commands 200 reports leading to disciplinary action against more than 300 “responsible parties.”  More than 130 investigations were directed to the “military-investigative organs” [the military section of the Investigative Committee or SK].  More than 100 criminal corruption cases were developed.  He credits the system of coordination among the “organs” involved.  But corruption sometimes has a very organized character.  He cites the loss of 128 million rubles to a corruption ring of officers from the Defense Ministry’s “central apparatus,” the apartment management directorate and staff of the MVO who stole and sold 140 vehicles and pieces of equipment in 2005-2008.

Mukhin gives some attention to the GVP’s figures too.  He adds that the GVP uncovered 1,500 corruption crimes in the ‘power’ ministries as a whole in 2009.  Every other case was either aggravated, or especially aggravated.  In 70 percent of cases, officers were the culprits.  In the GVP, they say that dishonest military commanders are making a fortune on auctions and contract bidding.

Mukhin then reminds everyone that it was Prime Minister Putin who, in late 2008, gave the Defense Ministry the right to handle its own VVI, rather than the Federal Agency for the Management of State Property.

Commenting for Grani.ru, Vladimir Temnyy also blames Putin for letting the Defense Ministry run these auctions.  The first thing Serdyukov intended was to inventory and get rid of noncore property and functions which lead generals to embezzle state funds, but this has apparently happened anyway since 9 billion rubles are missing.  So why wasn’t somebody like Serdyukov, as everyone expected, able to pull off a successful process of shedding VVI and benefiting the state.  Two reasons–the crisis and theft by his subordinates surpassing all conceivable limits.  Could the reformer become a victim of his own trust in his people?  The state won’t get the money back anyway because it’s already gone into fabulous suburban homes occupied by modest colonels and generals, according to Temnyy.  So the sale of VVI has raised military living standards after all, at least for some.

Recall also that Nikolay Poroskov said one source told him the recent command changes weren’t just about age and rotations, a third reason was the results of the personnel [and GVP?] inspection above.

Also, there’s the talk about devising a new “officer’s honor code.”  Certainly, it will prohibit corruption.  Can’t be a coincidence.

Babich on the Command Changes 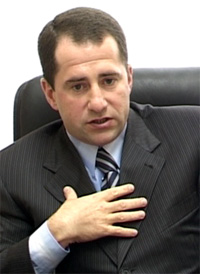 United Russia Duma deputy, and deputy chair of the Duma’s Defense Committee, Mikhail Babich believes that those who don’t agree with reforms in the armed forces are being pushed out.  NEWSru.com reports on what Babich told Interfaks.

“Changing military commanders–this is not a planned rotation.  This is an attempt to stop the possibility of a leak of any objective information from the troops.  Former Ground Troops CINC [Army] General Boldyrev, being a sufficiently professional military commander and understanding the hopelessness of what’s occurring, calculated it was better for him to go out on his pension than to continue putting today’s reforms into practice.  This also goes for the dismissal of very promising, well trained, and organized General [-Colonel] Sergey Makarov, but it’s only tied to the fact that the SKVO commander correctly, but very professionally established his position in relation to the negative consequences of transferring the district’s troops to the so-called new profile.  Rotating military commanders, undoubtedly, will continue to the point when those who don’t agree (with the conduct of reforms) or who have their own point of view no longer remain at all in the armed forces.”

“The Genshtab chief is promoting people personally attached to him who owe him their military careers.  In this way, he’s trying to buy some time to cover up the negative consequences of the ongoing military reform, which are increasingly obvious today.”

Babich said a just completed check of unit and formation combat readiness in the DVO “ended in complete failure.”

“According to the results of the check, practically all units of the air-assault and motorized rifle brigades put on alert turned out to be not combat ready.  A complete zero–beginning from manning, ending with equipment readiness, its capability to exit the parking area, availability of mechanic-drivers and drivers, who are qualified to operate this equipment.  Despite the fact that they’ve already reported to the Supreme Commander-in-Chief [Medvedev] ten times about the fact that since 1 December 2009 all units and formations of the Russian Army have been transferred to the permanent combat readiness category and are fully combat ready, really not one of them is such.  The real situation is completely otherwise, but the Genshtab chief continues to mislead the Defense Minister and the country’s highest military-political leadership about the real state of affairs.”

President Medvedev Gets Report from Serdyukov

On force modernization issues, Medvedev emphasized this year’s priority on preserving the strategic nuclear component.  Looking over infantry weapons, he said he wants Russia to create modern, effective, and economical small arms.  They should be competitive with the best foreign models, he added.

He inspected some new wheeled vehicles and armored vehicles from KamAZ, and looked over the Tigr vehicle which will go to special operations sub-units.  He was told it was not adopted widely in the armed forces because it has a powerful American-made engine.  Serdyukov said a similar Russian engine is being developed.

Serdyukov reported that ineffective repair work was cut by 28-30 percent this year.  The Defense Ministry also significantly cut ineffective RDT&E, and savings from both were put toward buying new arms, according to Serdyukov.  He asserted that, in line with Medvedev’s direction, financing for the 2010 GOZ is beginning earlier than in the past, as early as 15 January.

Serdyukov assured Medvedev that all servicemen in line would receive apartments this year.  Medvedev responded that, “No weapon will be as important in comparison with meeting the promise we gave officers to supply them with apartments.”  Serdyukov reported that the Defense Ministry met its housing target for 2009 by obtaining 45,614 apartments.