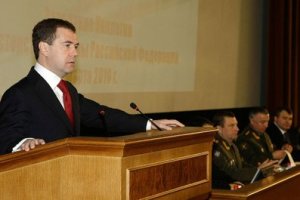 In his remarks [text and video], President Dmitriy Medvedev reviewed the results of 2009 and talked about future plans for the armed forces.

He focused first on the international situation, noting that, “. . . today we have no requirement to increase further our strategic deterrence potential,” although it remains a determining factor in Russia’s conduct of independent policies and the preservation of its sovereignty.

He noted Moscow’s new law authorizing the use of force to protect Russian citizens abroad, and he pointed to unresolved conflicts on Russia’s borders [where presumably the new law could be used].

Medvedev acknowledged some positive tendencies such as work on a new strategic arms control agreement and renewed Russia-NATO contacts.  But he called the West’s reaction to Russia’s draft treaty on European security a barometer of relations with the U.S. and NATO.  He said it could prevent conflicts like Georgia-South Ossetia.  Medvedev asserted that, unfortunately, far from all countries and politicians drew the correct lessons from the August 2008 events.  And, unfortunately, he said the reestablishment of Georgia’s military potential continues with external assistance.

Then Medvedev turned more to the exact points of his speech.

He said the main goal is the qualitative improvement of the armed forces, the creation of a modern army and fleet equipped with the newest weapons.  He said last year the organizational base for this was established, as planned, without expending additonal resources.

In 2009, Moscow got its authorized personnel down to 1 million, and, according to the President, the Defense Ministry largely achieved its task of getting to the military’s future combat composition.  Medvedev said the results of Osen-2009 confrmed this, and more exercises like it are needed and need to have a ‘systematic character.’  Because, “Without this there simply are no armed forces.”

Medvedev called the training of officers the ‘most important task. Motivated, high-class specialists are needed, but the recently degraded military educational system and its material base need improvement. Medvedev said particular attention also needs to go to sergeants.  They need to be capable of replacing front-line officers when needed, according to the Supreme CINC.

Medvedev called the task of reequipping the troops with new armaments ‘extremely complex and very important.’  He said last year Russia stabilized the condition of its arms and equipment, despite the financial crisis, and fulfilled the GOZ, although not without problems.

He called the contracting mechanism for arms purchases ‘not effective enough,’ and said we are  working on this, but it’s slow.  This year the State Armaments Program, 2011-2020 will be written.  Medvedev gave the government the task of renewing arms and equipment at an average rate of 9-11 percent annually to allow Moscow to reach 70 percent modern armaments by 2020.  Reequipping has to be supported by full and timely financing.  He referred to his Poslaniye list of  priority systems and arms to be acquired.  He said this task will not be adjusted, and old weapons need to be decommissioned [He seems to have gotten it into his head that new means good and old bad which is not necessarily the case with Russian weapons.  What happens if you scrap lots of stuff, but you don’t succeed in producing new stuff?].

Medvedev said, as he’s already said more than once, steps are needed to bring order to the use, storage, and upkeep of missiles, ammunition, and explosives.  The events of the last year have shown there are problems here [alluding to Ulyanovsk, Karabash, etc.].

Medvedev noted another issue, providing the armed forces with automated command and control, and information systems, and transferring the military to digital comms by 2012, as put forth in the Poslaniye.  He said Zapad-2009 worked on mobile automated C2, but this was only a beginning to the work, which needs to be intensified, because “the communications situation is problematic.”

Medvedev obligatorily cited increasing the prestige of military service and improving the social defense of servicemen as a priority task.

“I’d like to note that all obligations of the state to current and released servicemen will be fulfilled unconditionally, I will not accept any amendments for budget changes, or for other reasons.”

Medvedev said the government has the clear task to guarantee that all servicemen needing permanent housing have it by the end of this year, and service housing by the end of 2012.

“The realization of this task is not going badly, I will also take this under my personal control.”

Finally, Medvedev spoke for a moment to pay issues.  Increasing pay, and instituting a new pay system for active duty troops from the beginning of 2012, and increasing pensions to retired military men [but nothing specific promised].

He said he thinks premium pay or the well-known Order 400 brought respectable results, and it will be important to preserve ways of rewarding servicemen with extra money under the new pay system, and he expects proposals on doing this.

Defense Minister Serdyukov had some comments after Medvedev’s speech, but they’ll have to wait until tomorrow.

One response to “Medvedev Speaks at Defense Ministry Collegium”