Russia experienced a drastic decline in the prestige of military service in the 1990s.  Generals, officers, and politicians have debated efforts and initiatives to resurrect it ever since.

The military’s prestige is represented or reflected in many things:  pay,  living conditions, budget resources, political emphasis, applications for VVUZ admission, etc.  But it’s still a slippery notion not easy to quantify.  One even occasionally reads that, in Soviet times, every girl wanted to marry an officer.  Not so today.

“The prestige of military service has started to be reestablished.  The confidence and personal worth of people in shoulderboards has been reborn.”

“It’s not simple for our army today.  Perhaps harder than for other state structures.  Much depends today on the understanding and patience, on the continued patience of soldiers and officers.  And their wives.  On the feeling of responsibility for the state inherent in the military man from time immemorial.”

“I very much would like for our boys just as in former times to begin dreaming again of the profession of military pilot, military engineer, tanker, artilleryman, missileman, and for their parents to be sure that their sons made the correct choice.”

In late 2011, we’ve found out how Krasnaya zvezda’s readers see it.  The homepage of the Defense Ministry daily’s website has been asking its visitors about the prestige of the military for some time now.

Is the Profession of Officer Prestigious in Russia? 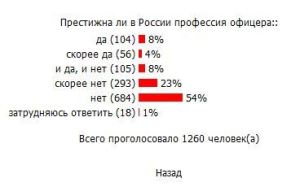 Only 8 percent of 1,260 respondents say yes.  Only 12 percent say yes or probably yes.  Fifty-four percent say no, and 77 percent — three of every four — say no or probably no.

Not much progress in rebuilding the military’s prestige over the last 11 years.

Of course, it’s an Internet poll, it’s not random sampling, and it wouldn’t stand scientific scrutiny.  Nevertheless, it’s very revealing because it’s right on the [electronic] front page of the Defense Ministry’s newspaper.

Levada’s reported for some time on sagging esteem for the officer’s profession.  Last month only 6 percent of respondents picked army officer as the most respected profession in society.  Five percent picked criminal авторитет.  Only 2 percent considered army officer the most profitable career.

If it’s this difficult to make officer a prestigious profession, imagine how hard it is to make professional enlisted service in the Russian military a respected job.