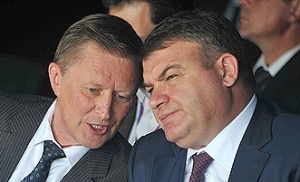 After a couple months and 50 votes, Defense Minister Anatoliy Serdyukov got past his predecessor Sergey Ivanov by a margin of 30 votes to 20 for the title of better defense minister.

It was interesting.  Serdyukov (your author’s choice) jumped out to a big lead, and Ivanov spent the rest of the time trying hard to catch up, but never quite making it.  Every time Ivanov started to, Serdyukov supporters came out and boosted his numbers.

It was surprising though.  Your author thought Serdyukov would crush Ivanov.

Of course, none of this was scientific.  And it was a fallacious comparison.  The men arrived in different circumstances and experienced different situations.

For this author’s money, though, Serdyukov has done a much better job with the hand he was dealt.  Primarily because he’s actually done some things.  And he broke the uniformed military’s grip on defense policymaking.  Granted, the results haven’t been exactly perfect.  And, over time, views of Serdyukov will be influenced by what comes after him.  But 60 percent in this little poll isn’t a bad showing for a guy who encountered and tamed a lot of resistance along the way.

Ivanov, by contrast, was timid, tentative, and generally ineffective, in this writer’s view.  To be fair, he held less favorable cards by comparison, especially early on.

It may possible, of course, that the 20 votes for Ivanov are anti-Serdyukov votes rather than pro-Ivanov.