Putin and the Army (Part II) 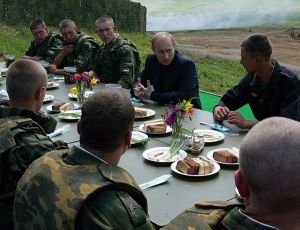 Describing the army’s “social dimension,” Putin says a modern army requires well-trained officers and soldiers on whom more demands can be placed.  And they, in turn, deserve pay commensurate with that of specialists and managers elsewhere in the economy.

Hence, the new pay system for officers this year which practically tripled their remuneration.

Putin mentions that military pensions were increased 1.6 times (60 percent), and he promises they will now increase annually by not less than 2 percent over inflation.

Retired or dismissed servicemen will get a “special certificate” good for further education or for retraining.

Then Putin tackles the painful military housing issue.  After recounting its history, he says, in 2008-2011, the army obtained or constructed 140,000 permanent and 46,000 service apartments.  But he admits:

“. . . despite the fact that the program turned out to be larger in scale than earlier planned, the problem still wasn’t resolved.”

He says the accounting of officers needing apartments was conducted poorly, org-shtat measures [dismissals] weren’t coordinated with the presentation of housing, and the situation has to be corrected.

Putin is, of course, alluding to the fact that maybe 30,000 or 80,000 of those 140,000 apartments the Defense Ministry acquired or built remain unoccupied.  But he’s not exactly tackling the problem head-on.

Putin says the “eternal” permanent and service apartment problems will finally be resolved in 2013 and 2014 respectively.

But in mid-December, in his “live broadcast,” Putin said his new deadlines were 2012 and 2013.  So, he’s just given himself an extra year on each.

Putin says the military’s mortgage savings program now has 180,000 participants, and 20,000 apartments have been acquired through it.

He also notes that regions and municipalities won’t have broken down military towns and infrastructure foisted upon them.

Putin gives the familiar figures–there are 220,000 officers and 186,000 sergeants and soldiers who now serve on contracts.  Over five years, the army will try to recruit 50,000 professional soldiers each year.

Selection, Putin says, will be strict, and contractees will be trained in special centers and sergeant schools.

Putin says the mixed contract-conscript system of manning used for quite some time was just a compromise because Russia couldn’t afford an all-volunteer army.

However, politicians and generals always extolled the mixed system because it retained a universal obligation (at least theoretically) and kept the military from becoming “mercenaries.”

Putin endorses military police and priests in the ranks to keep order among remaining conscripts.  He also promises those who serve as draftees assistance with education and preferences in entering the government service.

The Prime Minister admits Russia lacks a concept for its national military reserve system, and developing one is a near-term task.

Although the course is set for a professional contract army, Putin still wants young men to prepare for service.  So don’t forget about military-patriotic indoctrination, military-applied sports, and DOSAAF.

And Putin indicates he supports Deputy PM Dmitriy Rogozin’s proposal for a Volunteer Movement of the National Front in Support of the Army, Navy, and OPK.

Part III will be the final five pages on the OPK.

3 responses to “Putin and the Army (Part II)”