A couple weeks ago, Aleksandr Golts wrote in Ogonek about the situation in which Defense Minister Shoygu finds himself.  Golts has two main points.  First,  small policy changes can lead to big ones which unravel former Defense Minister Serdyukov’s positive reforms.  Second, Shoygu in uniform is a setback to real civilian political control of Russia’s Armed Forces.

Golts says that, although officers had their pay raised 2-3 times and tens of thousands received apartments thanks to former Defense Minister Serdyukov, the military still clamored immediately for Shoygu to change every decision made by his predecessor.  Chairman of the Duma Defense Committee, KPRF member, ex-admiral Vladimir Komoyedov called for lengthening the conscript service term.  Generals associated with retired Marshal Dmitriy Yazov demanded an expert review of the results of Serdyukov’s tenure.

However, Golts notes both President Putin and Prime Minister Medvedev gave Serdyukov’s painful reforms high marks (Smirnov in Gazeta made the same observation).  So, concludes Golts, it was a signal to Shoygu that no fundamental review of them is needed.  This left Shoygu in a complicated situation.

So Shoygu has taken some minor decisions to placate those seeking the pre-Serdyukov status quo.  But these small steps, writes Golts, can have big consequences.  Reestablishing the Main Directorate for Combat Training (GUBP or ГУБП), for example, will ultimately undercut the authority of the main commands of the services and branches as well as (and more importantly) of the four new MD / OSK commanders.

Reversing Serdyukov’s significant cuts in the Russian military educational establishment will put unneeded officers in the ranks to reanimate cadre units and the mass mobilization system.

Lastly, Golts is critical of the president for deciding to “return” the rank (and uniform) of Army General to the Defense Minister.  Observers commented this was done to give Shoygu “authority” within the military which his predecessor sorely lacked.  But Golts says the army has a way of ensnaring a Defense Minister, drawing him into the military “clan” or “corporation.”

The Defense Minister’s civilian status, Golts continues, was the very first step in establishing if not civilian, then at least political control over the military.  But establishment of civilian control takes more than one civilian minister.  It takes civilians who formulate decisions for military men to execute.  He points to Serdyukov’s attempt to separate civilian and military functions and competencies in the Defense Ministry.

“Now the generals will return to their places, and the minister himself will be doomed to make not political, but purely technical decisions and bear responsibility for them.  In essence, he is returning to be the hostage of the military who prepares these decisions…”

One has to agree that Shoygu’s three-month tenure consists of little more than examining and questioning every decision made by Serdyukov.

Shoygu’s status as civilian or military is more interesting.

He passed through the general’s ranks to four stars between the early 1990s and early 2000s.  More unclear is how or why he got the first star.  He had been a strictly civilian and party figure.  Many readers may not realize Shoygu’s MChS is a “military” (militarized or paramilitary) ministry where servicemen and officers with ranks serve like in the Armed Forces, MVD, or FSB.  So, at some level, it may not be fair to claim anyone “returned” his rank, or forced him to wear a uniform.

The question is does an MChS rank carry any weight or “authority” in the Defense Ministry?  Recall Sergey Ivanov never wore his SVR or FSB General-Colonel’s uniform as Defense Minister.

Shoygu remains an inherently civilian and political figure whom President Putin turned to in a pinch and trusts to keep the lid on at the Defense Ministry.  Russians joked in November that the old Minister of Emergency Situations was clearly the right guy for the job when the Oboronservis scandal broke and Serdyukov had to go.

One shouldn’t worry about Shoygu and civilian and political control of the military.  The slippery slope of undoing Serdyukov’s positive efforts, on the other hand, is concerning.

Before Russia’s holiday topor fully enshrouded military commentators, Gazeta’s Sergey Smirnov published an interesting piece on the situation in which Defense Minister Shoygu finds himself.  There isn’t a lot of great comment on Shoygu yet, but it might be cranking up.  Smirnov looks at how the popular Shoygu could mar his well-regarded career while tackling the same accumulated military structural problems that faced his predecessor.  He writes about possible bureaucratic and personal conflicts with Sergey Ivanov, Sergey Chemezov, and Dmitriy Rogozin.

According to Smirnov, Russia’s military added virtually no contractees in 2012, but still has to recruit 50,000 of them every year until 2017 to reach its assigned target of 425,000.  The obstacles are the same.  Eighty percent of them don’t sign a second contract because the army doesn’t offer living conditions more attractive than barracks.  Undermanning is a related problem.  Smirnov says the military’s manpower is certainly below 800,000.  And Shoygu may have to acknowledge this problem.

Smirnov describes Serdyukov’s conflict with Rogozin over the OPK and its production for the military.  He claims the “Petersburg group” of Sergey Ivanov, Chemezov, and Viktor Ivanov wanted one of its guys to take Serdyukov’s place at the Defense Ministry.  But Putin didn’t want to strengthen them, so he took the neutral figure Shoygu.

According to Smirnov, Serdyukov wanted out, and wanted to head a new arms exporting corporation to replace Rosoboroneksport.  That, of course, conflicted directly with Chemezov and the interests of the “Petersburgers.”  And Smirnov makes the interesting comment:

“But that appointment [Serdyukov to head a new arms exporter] didn’t happen precisely because of the big criminal cases which arose not by accident.”

Was Serdyukov done in for overreaching rather than for corruption scandals in the Defense Ministry?

Shoygu, writes Smirnov, was not thrilled at the prospect of continuing the “not very popular” army reforms.  Smirnov is left at the same point as everyone else:  will it be a “serious revision” of Serdyukov’s reforms or a “course correction?”

There’s lots of talk to indicate the former rather than the latter.  The new VVS CINC has bloviated about returning to one regiment per airfield instead of large, consolidated air bases.  He claims the Krasnodar, Syzran, and Chelyabinsk Aviation Schools will be reestablished.  He babbles about going to a three-service structure and retaking VVKO.  Shoygu will allow Suvorov and Nakhimov cadets to march in the May 9 Victory Parade.  He stopped the Military-Medical Academy’s move out of the center of Piter.  Other commonly mentioned possible revisions are returning to six MDs and transferring the Main Navy Staff back to Moscow.

Serdyukov’s outsourcing policy led to scandals, and didn’t work for the Russian military’s remote bases.  Gazeta’s Defense Ministry sources say the structure and activity of Oboronservis will likely be greatly modified or, less likely, Oboronservis will be completely disbanded if some workable entity can take its place.

The military wants municipal authorities to take over the vast majority (70-90 percent) of a huge number of old military towns (that once numbered 23,000) no longer needed by Armed Forces units.  The army only wants some 200 of them now.

The local government wants the military to provide compensation to restore and support these towns, but the latter doesn’t have the funds.  The army is laying out billions of rubles in the next three years, but only to outfit 100 military towns it wants to use.  There is also the problem of who gets, or has the power to give away, legal title to this military property.

Shoygu, says Smirnov, has to solve the unresolved problem of officer housing, especially for officers “left at disposition” of their commanders (i.e. not retired but lacking duty posts and apartments).  The Defense Ministry still doesn’t know how many need housing.  Smirnov writes:

“Despite the fact that the military department daily reports on the handover of apartments, the line of officers retired from the army who are awaiting receipt of living space is not becoming smaller.  At present from 80 to 150 [thousand] former officers are awaiting the presentation of housing.”

More than enough lingering headaches for one Defense Minister. 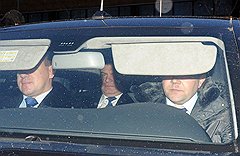 Serdyukov on His Way to the SKR (photo: Kommersant / Dmitriy Dukhanin)

On Friday, the Investigative Committee of Russia (SKR) subjected Anatoliy Serdyukov to a couple hours of questioning about the Oboronservis corruption scandal.  This session was scheduled when the former defense minister refused to answer questions on December 28 because his attorney was ill and not present.

Nothing much changed this time.

Media accounts claim Serdyukov again effectively refused to answer SKR questions, taking the Russian version of the 5th (the 51st Article of the RF Constitution against self-incrimination).  He presented some written material to investigators describing the process of selling excess Defense Ministry property during his tenure.  But, according to Vedomosti, Serdyukov denied any wrongdoing, and placed blame for the sale of significantly undervalued and underpriced military real estate squarely and completely on his former subordinates (currently under indictment).

SKR patience with Serdyukov is wearing thin.  In fact, spokesman Vladimir Markin basically warned that he could become a suspect:

“In this situation, the former defense minister’s position might be regarded as an attempt to obstruct the investigation.  If the former defense minister believes he did not participate in those events which have become the subject of the investigation, then it would be fully logical to answer specific questions of interest to investigators.  But Mr. Serdyukov and his attorney believe it simpler to lay out a free form version of events in a light favorable to himself, and not to answer uncomfortable questions of substance for the investigators.  But in the investigation there is a large number of questions for Serdyukov about how decisions on the sale of Defense Ministry property were made, why deals were made at certain prices.”

“The position Mr. Serdyukov has taken does not guarantee that he will remain just a witness in the case.  It is fully probable his status could change.”

Kommersant and Interfax.ru reported Serdyukov claimed he signed off on paperwork for Defense Ministry property deals without looking into their “commercial aspects.”

A Kommersant source in the SKR admitted problems connecting Serdyukov to property sales or kickbacks.  However, he said investigators are looking at why Defense Ministry personnel and equipment built an 8-kilometer, 20-million-ruble road for a VIP resort in Astrakhan Oblast partly owned by the ex-defense minister’s brother-in-law, Valeriy Puzikov.  They’re also looking into high-priced Black Sea vacation homes built by Puzikov on Defense Ministry land.

The SKR is apparently warming up charges against Serdyukov for exceeding and misusing his official authority.

Investigators are clearly turning up the heat on Anatoliy Eduardovich.

“Serdyukov has a lot to be silent about.  Because if they’ve already decided to put him in jail, then helping the investigation is unrewarding.  Besides, it seems, the ex-minister still has a glimmer of hope that they will protect him.  Or, if you like, fight them off.”

“Judging by the reaction of official SK representative Vladimir Markin to the result of the second questioning, the Investigative Committee’s intention to put Serdyukov behind bars is practically unyielding.”

The blog calls Serdyukov a Putin creature who became “untouchable” but then got out of Putin’s control.  It concludes:

“The status of Anatoliy Serdyukov (witness or accused) depends not on what he said or was silent about, and not on how the investigator evaluated his answers or silence.  The fate of an official at such a level, at which Anatoliy Serdyukov dwelled, is decided exclusively in the Kremlin, that is, at the highest level.”

So will Putin see any reason to save Serdyukov, or will Putin leave him to the wolves?  Or can Putin control the wolves at this point?