The Voronezh Aircraft Plant is assembling the first prototype of the Il-112V light transport aircraft, according to the Ilyushin design bureau.  Russian Deputy Defence Minister and procurement tsar Yuriy Borisov has indicated that the Russian military will buy 48 of them in the state armaments program for 2018-2025, expected to be approved by mid-2017.

The first Il-112V airframe should be complete by the end of January when ground testing is to begin.  Flight tests could start this summer followed soon thereafter by state acceptance testing, Borisov told Gazeta.ru’s Mikhail Khodarenok.  The Voronezh plant has also begun assembly of a second Il-112V.

The new transport will take the place of aging Antonov An-26 / Curl aircraft.  The Russian military still operates about 100 of the venerable transports.  More than 1,100 were produced between 1969 and 1986.

Series production of the Il-112V is supposed to start in 2019 with a rate of 12 aircraft per year.  The production run has been pared back to 48 from the original target of 62 transports.

Funding for Il-112V development was cut in 2010 when former defense minister Anatoliy Serdyukov opted to buy modified An-140 transports from Ukraine.  But the Russian light transport program was revived in 2013.  It received special impetus after Kyiv halted military-technical cooperation with Moscow in early 2014.

The Il-112V depends on successful production of TV7-117ST turbofan engines by Russian manufacturer Klimov.  The first two are scheduled for delivery and installation on the prototype airframe in February.  The Klimov engines will substitute for ones that Moscow used to import from Ukraine’s Motor Sich. However, they are not equal to Ukrainian engines in several respects including horsepower, service ceiling, and reliability, according to Khodarenok’s aviation sector sources.

The new Russian transport is designed for a takeoff weight of 21 tons with a maximum useful load of five tons.  It will carry 3.5 tons to a range of 2,400 km. 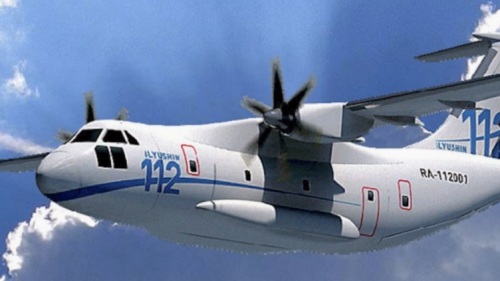 According to a recent report in Izvestiya, the Central Aerodynamic Institute (TsAGI or ЦАГИ) has raised the prospect of developing a different Russian light transport that could be rapidly converted between passenger and cargo variants.

Outside Russia, there are some 600 An-26 transports still operating, but they are at the end of the service lives and need replacement.  This provides a ready market for Ilyushin’s new light transport, but it already faces stiff competition from established products like the Airbus CASA C-295 and Alenia C-27J Spartan.

The Il-112V is an increasingly critical requirement given the obsolescence of Russia’s existing light transport inventory.  The urgency of the program is further underscored by Russia’s apparent difficulties in producing components to assemble the Ukrainian-designed An-140.

6 responses to “Il-112V Light Transport in Next Armaments Program”