As noted earlier, there were relatively few Russia Day promotions in the MOD, possibly because President Vladimir Putin handed out a lot of new brass to his personal National Guard.

Eleven men received their first stars including the: 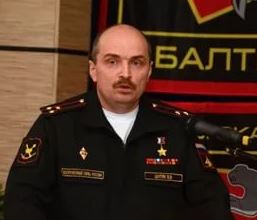 General-Major Shulyak as a colonel

The latter — 48-year-old General-Major Viktor Shulyak — received his Hero of the Russian Federation award as a young Naval Infantry officer in Chechnya in January 1995.  He commanded a Northern Fleet air-assault company in the fight for the Council of Ministers building in central Groznyy.  He personally destroyed five enemy firing positions and was pretty severely wounded.

Two new general-majors were not identified precisely, but one is probably in the Aerospace Forces and the other might be a deputy chief of staff for the Central MD.

The promotion list now contains names of more than 400 generals and admirals against the 730 the MOD says it has.

This entry was posted in Military Leadership and tagged Decree, Promotions, Ukaz. Bookmark the permalink.