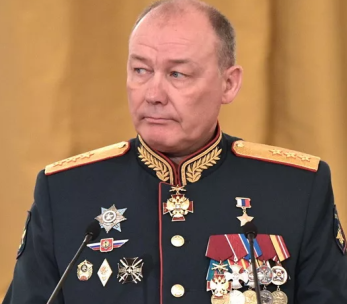 He won’t remain in the Southern MD where he’s been for four years at that rank. So, he’s likely to replace either Gerasimov or Salyukov. More likely the latter. Salyukov turned 65 on May 21 and is ready for a sinecure. He was in charge of this morning’s parade.

Gerasimov’s 65 in early September, and his turnover is more critical and will take more time to prepare.

More difficult and perhaps more interesting — which general will take over in the Southern MD?

Not many candidates at the three-star level. Perhaps Sergey Kuralenko, currently COS / FDC in the Eastern MD, but he’s already almost 59. Maybe.

General-lieutenants are harder to gauge. Maybe Dvornikov’s first deputy, Sergey Kuzovlev will move up. Perhaps Mikhail Teplinskiy, who’s in the same post for the Central MD, and he has lots of Southern MD experience.

At any rate, the rare fourth star for a real military man is interesting.

RF President Putin wasn’t terribly generous with military promotions on the eve of Russia Day. For the MOD, he promoted one three-star, four two-stars, and 14 one-stars. Putin’s alternative army, the National Guard got one three-star and two one-stars. 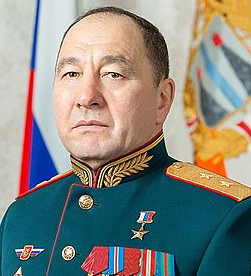 Eastern MD Commander Zhidko got his third star, catching him up with the other Russian MD commanders. 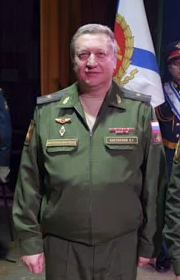 No precise current posting could be found for four promotees.

On February 20, RF President Vladimir Putin signed out his ukaz with military promotions in advance of Defenders’ Day (February 24). 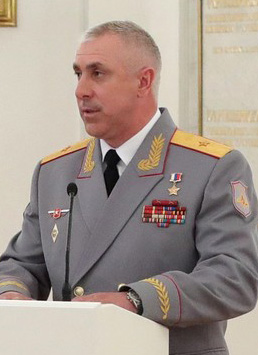 The rising star of the MOD group is probably newly-minted General-Lieutenant Rustam Muradov.

Muradov’s a combined arms officer and Deputy Commander of the Southern MD. He commanded two different motorized rifle brigades. He was first deputy commander, chief of staff of the 41st Combined Arms Army. He served with Russian forces in eastern Ukraine and was a military adviser in Syria. In that capacity, he received Hero of the Russian Federation from Putin. Muradov commanded the 2nd CAA for a year.

His father is likely retired Admiral Yuriy Sysuyev who was a submariner, one-time 5th Eskadra commander, and naval educator.

Can see some folks have been waiting for this. Thanks for your patience.

For the MOD, it included two three-star, five two-star, and 22 one-star promotions (19 general-majors and three rear-admirals).

For Putin’s Natsgvardiya, it was skimpy. Its top ranks must be full. Only two two-stars and five one-stars.

On the MOD list, GOMU Chief Burdinskiy and Eastern MD COS / FDC Kuralenko made general-colonel. 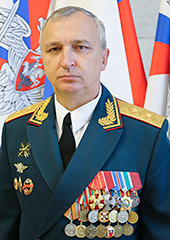 The updated spreadsheet with more detail is available here. 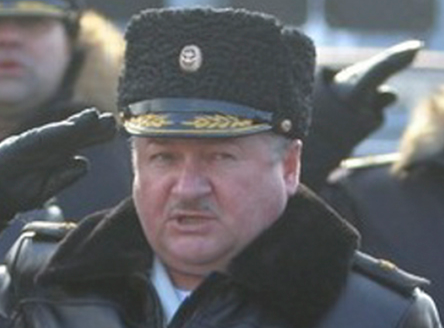 Putin’s list this time was interesting because four generals were picked up for two-star after waiting seven or eight years for it. They include:

Putin, and Defense Minister Shoygu perhaps, really seem to like the NTsUO and the GSA’s Military Strategy Faculty at this time for some reason.

Other two-stars include the Chief of MOD’s GU MVS, a deputy chief of NTsUO (who picks up his second star in four years), the Chief of the Military Strategy Faculty at GSA, the chief of comms and deputy chief of staff for comms in the Eastern MD (strange choice for general-lieutenant), and the Chief of Staff, First Deputy Commander of the Pacific Fleet (VADM Rekish).

Six promotees couldn’t be identified in a post. Two are new two-stars. We have to assume they only reach general-lieutenant without public mention if they serve in the GRU, SSO, et al.

Short and long promotion list files will be available in the next day or two.

RF President Putin signed out his promotion list for Defenders’ Day on February 22. He was generous to the MOD.

Twenty-seven officers were promoted to or within the general and flag ranks: one four-star, two three-star, six two-star, and 18 one-star promotions were handed out.

Just shy of 50, Sychevoy seems to be a mover. But he also appears to be camera shy, so no photo.

Yarovitskiy in the Baltic Fleet’s 11th Army Corps served in the First Chechen War and was chief of staff, first deputy commander of the 1st Tank Army, according to one bio. 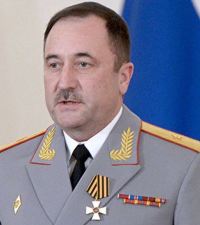 Yuriy Yarovitskiy as a one-star

New vice-admirals are Deputy Commander of the Black Sea Fleet Sergey Lipilin and a deputy chief of the NTsUO. 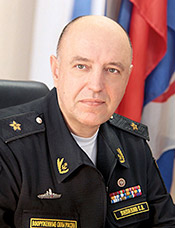 Headed by newly minted General-Major Sergey Parshin, the MOD’s 9th Directorate is one of the Russian military’s more secretive elements. It designs and builds silos, launch positions, command, control, and communications networks, and underground command posts and bunkers for the RVSN and Russia’s missile defense system. 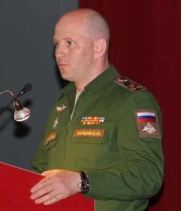 Parshin as a colonel

There were seven promotees for which a position couldn’t be identified at this time.

Putin handed out the four-star rank of army general for the first time in a while. To Ground Troops CINC Oleg Salyukov. 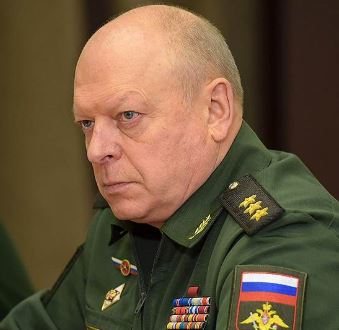 We’re not talking about Shoygu himself, who got his four-star rank as a politician and bureaucrat.

And we’re not talking about Deputy Defense Minister Nikolay Pankov, FSB man and associate of former defense minister Sergey Ivanov. (Pankov’s a fascinating and separate story. He’s the longtime éminence grise of the MOD. One might bet he’s always been Putin’s reliable spy in the high command. He’s also been officially retired from military service for some time.)

It’s safe to conclude then that Putin’s been quite parsimonious with the “big star.”

Recall Russia’s gone back and forth on four stars. For some time, army generals actually wore four stars. Now they wear a single “big star” like marshals, but on different epaulets.

The last Ground Troops, Air Forces, and Navy CINCs to wear four stars were Vladimir Boldyrev in 2010, Vladimir Mikhaylov in 2007, and Vladimir Masorin in 2007.

But like all Russian laws, the law on military service tenure can be ignored or changed easily if Putin wants.

A little more about Salyukov. He’s a tanker. He served in the old Kiev MD as a junior officer, and then the Moscow MD. He was deputy commander of the 4th Kantemir Tank Division. After the General Staff Academy, he went to the old Far East MD in 1996, serving from division commander to commander of the district in 2010.

When the MD system was reduced to just four MDs, Salyukov returned to Moscow for a four-year stint as deputy chief of the General Staff. In May 2014, he became Ground Troops CINC. His official bio says he’s a combat veteran, but it’s unclear where he was actually under fire. 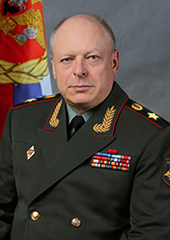 RF President Vladimir Putin signed out his latest promotion list on December 12, 2018. For the MOD, it included two new three-stars, 10 two-stars, and 11 one-stars.

Chief of Staff and First Deputy Commander of the Central MD Yevgeniy Ustinov became a general-colonel. 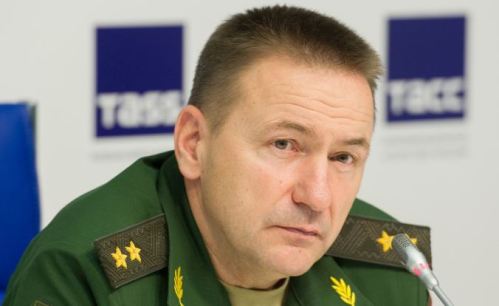 Ustinov served as a conscript in 1979-1980 before becoming a career Airborne Troops officer. He earned combat experience in his two years in Afghanistan serving as a deputy battalion commander.

After mid-career assignments and graduating MAGS, he served briefly as commander of the 106th Airborne Division in 2007. In 2009, he became deputy commander of the former Leningrad MD, and then commanded its 6th CAA.

He became deputy commander of the Central MD in 2013. He was TDY in Syria during 2016-2017 when he participated in the second operation to reclaim Palmyra. He was one of the leading contenders to replace Vladimir Shamanov as VDV commander in 2016.

He was passed over when younger General-Lieutenant Aleksandr Lapin was brought in from the Eastern MD to command the Central MD in 2017.

Ustinov has been acting MD commander since October so Lapin is likely commanding Russian forces in Syria now. But what about when Lapin returns? A two-star with a three-star first deputy? Lapin is likely to get his third star in February before he returns to the Central MD.

VDV generals who’ve traded blue for green uniforms may experience jealousy and resentment from career Ground Troops colleagues. Ustinov could be the victim of some of this.

Also getting his third star is Baltic Fleet Commander Admiral Aleksandr Nosatov who got his current post when his predecessor was dismissed for deficiencies in combat training and for distorted reports about the state of his command.

The two-star promotions include:

Four new general-majors could not be identified in a post at present.

A more detailed look at the MOD’s Defender’s Day promotees . . . .

General-Colonel Aleksandr Fomin is in charge of the MOD’s Main Directorate for International Military Cooperation (GU MVS) and the Directorate for Monitoring Treaty Fulfillment (National Nuclear Risk Reduction Center). He was director of FSVTS before coming to the MOD. 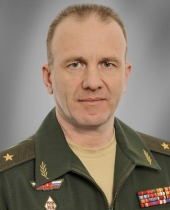 The sole flag officer promotee — Rear-Admiral Ivan Dubik — is known as the naval hero of Russia’s five-day war with Georgia in August 2008. He was a captain third rank (LCDR) in command of the BSF’s Mirazh (Nanuchka III-class) missile corvette. It apparently sank a Georgian patrol boat with an SS-N-9 / Siren ASCM. His current posting is unclear.

In all, eight promotees could not be identified in a particular billet at present.

RF President Vladimir Putin signed out his latest military promotion list on this eve of Defender of the Fatherland Day.

For the MOD, one general-colonel, four general-lieutenants, and 17 general-majors. Only a single rear-admiral (ouch). 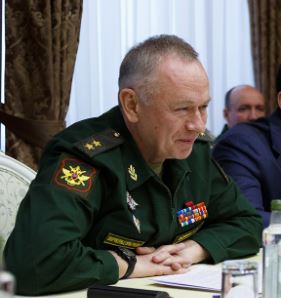 The four new general-lieutenants:  Yuriy Korsachev worked in the General Staff’s Central Command Post as an O-6 just before he got his first star . . . Yuriy Lastochkin is Chief of EW . . . Vladimir Trishunkin is Deputy CINC of Aerospace Forces for Material-Technical Support (MTO, i.e. supply) . . . Igor Khristoforov worked in the GS CCP with Korsachev.

Some of the one-stars:

P.S. The National Guard got 3 two-stars and 11 one-stars this go round.