The Russian media report more trouble for project 11711 LST Ivan Gren (BDK 135). During state trials, the new tank landing ship has been unable to run astern (reverse engines and go backwards). [Did Yantar shipyard really not discover this issue during its factory underway testing?] This comes atop Gren’s earlier degaussing problem which kept the Russian Navy from accepting the ship before the end of 2017. 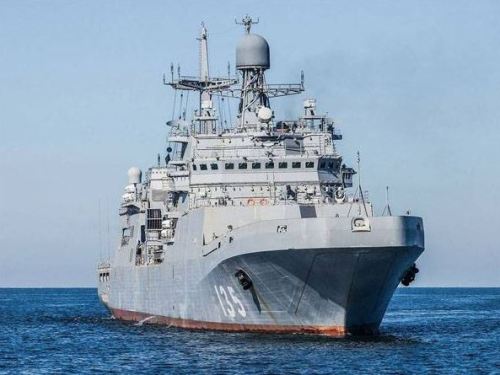 Yantar announced on February 20 that it might launch unit two, Petr Morgunov, in the second half of May. It’s also sticking to its promise, however unlikely, to deliver the completed LST to the Russian Navy before the end of 2018.

Yantar indicated the second unit’s port and starboard 16ChN26/26 (aka 10D49) diesel engines will be swapped to see if this remedies the astern running problems Gren experienced. But the work on Morgunov has to be done by late April to keep to its launch schedule.

If the swap works, the same [actually, perhaps even more] difficult process will be performed on Gren. But it will apparently be accepted into the fleet in May before its engine trouble is fixed.

Flotprom.ru reports the engine swap will alter the turning of ship’s propellers and eliminate the astern running problem. Any naval engineers out there are invited to explain how this could work to the rest of us! The shipbuilding industry site indicates trading engine places is complex and can consume several months.

The media also report that Gren now lacks good seakeeping qualities due to the many design changes made during its protracted construction. They even claim that the Russian Navy will forego further ships in this class, basically a modification of the Soviet-era project 1171 Alligator-class LST. How Moscow would fill the gaps in its small and rapidly aging landing ship force is anyone’s guess.

One response to “Engine Trouble”