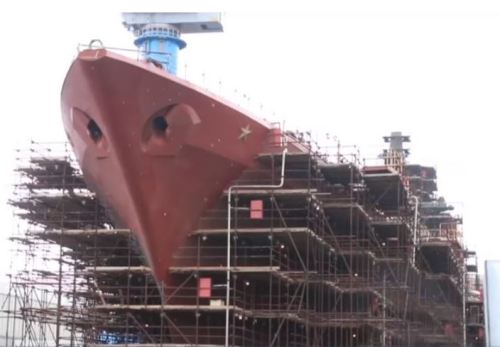 It’s been so widely reported it doesn’t bear much. But the sinking of SRZ-82’s PD-50 at Roslyakovo when Admiral Kuznetsov floated out seems incredible. Though it’s entirely believable given the problems afflicting Russia’s naval shipbuilding sector. In fact, it’s emblematic. 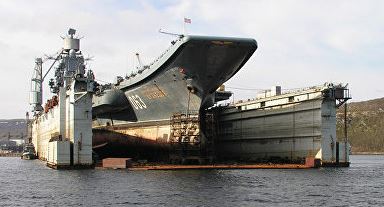 This has to be the “final straw” sending OSK chief Rakhmanov into retirement. Not that a new boss will be sufficient to turn this situation around.

But on to Admiral Nakhimov . . . the slipping has begun.

The TASS story from August 22 was effectively ignored in English media. That day the news agency reported the Russian Navy will not receive its renovated CGN Admiral Nakhimov until 2022.

“According to the contract with OSK, the heavy nuclear-powered missile cruiser Admiral Nakhimov must be delivered to the fleet in 2022, but there are some questions with financing. I hope, and am even sure, that they will be resolved soon.”

He is more sanguine than most perhaps.

Let’s start at the beginning.

In 1988, Admiral Nakhimov was commissioned into the Soviet Navy — the third of four Kirov-class nuclear-powered guided missile cruisers. The Russian Navy sent it to the Sevmash dock for repairs in 1999 where it languished for 14 years.

Finally, in mid-2013, the MOD gave Sevmash a contract for Nakhimov’s repair and modernization. It was supposed to return to the fleet in 2018. But work on the ship didn’t commence until October 2014. About this time it was expected to rejoin the navy by 2020.

In August, OSK chief Rakhmanov said customer changes to the plan for Nakhimov’s modernization will take longer to complete.

Now at fully four years into its reconstruction, Admiral Nakhimov has a ways to go. In 2017, spaces were cleared for new missile (Kalibr, Tsirkon) and air defense (Poliment-Redut) systems. But no installation work had begun. Integrating these weapons into new C2 systems won’t be easy although Nakhimov may benefit some from the sore experience of outfitting proyekt 22350 frigate Admiral Gorshkov.

The repair and modernization of Petr Velikiy will obviously be put off until Nakhimov is done. Interestingly, Sevmash’s Budnichenko said the former will be renovated either at Sevmash-affiliate Zvezdochka or Baltic Shipyard, but not Sevmash itself.

All the foregoing is mainly about keeping stock. The return of Nakhimov in 2018 has now become 2022. We’ll see how it actually ends up.

One response to “Admiral Nakhimov Slipping”