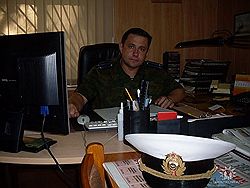 Last Tuesday, the Lyubertsy Garrison Military Court held President Medvedev’s dismissal of Lieutenant Colonel Viktor Biront to be illegal.  Recall Biront was the President’s and the Defense Ministry’s scapegoat when the 2512th Central Aviation-Technical Base of Naval Aviation burned in this summer’s infernos near Moscow.

A criminal case for negligence was also raised against Biront, but, according to Moskovskiy komsomolets, they punished him by dismissing him “in connection with nonfulfillment of contract.”  Biront fought back, and an inquiry revealed that, as of 1 February, the base’s firefighting unit had been disbanded, a 50-meter fire break hadn’t been established, and firefighting supplies were absent.  Biront had informed his leadership, but was ignored.  Biront’s lawyer also argued that his client had an impeccable 26-year service record, and had only been in charge of the Kolomna base for 3 months and 25 days.

The lawyer said Biront was left with 70 sailors to dig a fire safety zone around an 8-kilometer perimeter.  And Biront’s predecessor was fined for trying to dig this zone on his own.  The lawyer says the Defense Ministry plans to appeal the overturning of Biront’s dismissal.

In its coverage, Kommersant said Biront’s lawyer pointed out that every due process was violated in his client’s case:

“First an investigation is performed regarding the disciplinary violation which served as the basis for dismissal, then the serviceman should be familiarized with its results and guaranteed the right to present his objections.  None of this was done.”

The lawyer continues, “The president gave the order to sort it all out and dismiss the guilty, but they didn’t sort it out and found a scapegoat among the unit’s officers.”

In Kommersant’s version, Biront and 30 sailors fought the fires armed with nothing but axes.

One officer told the paper a chain reaction following Biront’s victory was likely, as others dismissed make similar appeals based on the lack of due process.

So, one can conclude that Medvedev’s ‘tough guy’ on-the-spot firing in the 4 August special Sovbez session was really nothing more than feelgood PR at best, or stupid at worst.  But, if they want to get Biront, they will, especially for being impudent enough to fight the system, and not being a quiet, cooperative victim.

Biront is one of those allegedly superfluous officers denigrated by the victors in Serdyukov’s ‘new profile’ reforms for being a ‘housekeeper,’ uninterested or unprepared to conduct combat training.

The news about the Biront case has received very little media attention.