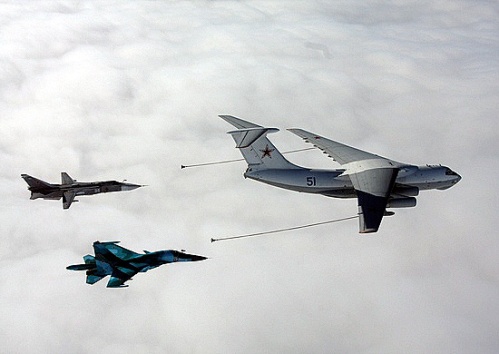 Writing in Izvestiya on December 26, Ilya Kramnik concluded that a shortage of aerial tankers is damaging the readiness of Russia’s air forces. He makes a convincing argument that Moscow has upgraded its air power but failed to provide the logistical support to operate it successfully.

The last half of his article is translated below.

“The fact that the country didn’t have the money to maintain large air forces to ensure the necessary composition of forces in any direction¹ became clear in the 1980s, and by then all future multipurpose fighters and frontal bombers had gotten the requirement for aerial refueling in their technical tasks. The transfer of aviation units from one direction to another, including with the help of aerial refueling, looked like a quicker means to support the concentration of forces than a transfer using intermediate airfields, and certainly much cheaper than maintaining the necessary number of aviation groupings in all directions.”

“The USSR’s collapse ruined practically all plans to renew military aviation, but in the end new aircraft entered series production. Besides Tu-160 and Tu-95MS strategic bombers, A-50 AEW aircraft and long-range Tu-142M reconnaissance aircraft kept in the order-of-battle, Su-34 frontal bombers, Su-30SM, Su-35, MiG-29SMT fighters being built for the Russian air forces today are being equipped with aerial refueling systems.”

“The above-mentioned Su-24M, Su-24MR reconnaissance aircraft, MiG-31B fighter-interceptors, including also the modernized MiG-31BM, were equipped with these systems. Of course, the fifth generation Su-57 fighter is also outfitted with an aerial refueling system.”

“Of the more or less new aircraft not having the refueling system were several dozen modernized Su-27SM, and the largest number of ‘unrefuelable’ frontal aviation aircraft are the Su-25 attack aircraft.”

“One way or another, the Russian air forces made into part of the Aerospace Forces [VKS] in 2015 have hundreds of aircraft equipped with the aerial refueling system, and this number is growing. Most likely, judging by everything, even though earlier deprived of this capability in the framework of strategic arms limitation the Tu-22M will receive it during the modernization of the Tu-22M3M variant. Besides this, the ‘strat’ inventory will grow also on account of restarting Tu-160 bomber production in the Tu-160M2 variant.”

“But there are no tankers. All this grandeur falls on one regiment of tankers with 15 Il-78 or Il-78M aircraft built on the base of the Il-76 transport aircraft.”

“The prospective growth in this number doesn’t inspire optimism because of the extremely difficult development of the new Il-76MD-90A series viewed as a platform for a tanker, and the air forces’ demand for transport aircraft themselves, and for airborne radars being built on this platform, the number of tankers clearly won’t turn out to be large. It would be optimism to suppose that the United Aircraft Corporation could deliver more than fifteen Il-78M-90A aircraft over the next 10 years, which in the best case would allow for increasing the number of aerial tankers in the air forces to 30 aircraft, including the Il-78 and Il-78M aircraft it already has.”

“And 15 or 30 tankers is very few considering that the number of aircraft capable of being refueled in mid-air will grow. Moreover, taking into account the shrinking inventory of military-transport aviation, it’s possible that refueling will be required for them in the future in order to increase the inventory’s capabilities without increasing its numbers.”

“In the final accounting, even the USA with its greater military budget practices the refueling of transports, while the typical distances of a possible transfer in Russia’s case can turn out to be a little shorter.”

“Air forces strategic mobility is one of the main priorities of military organizational development, the transfer of aviation units across the entire country is a characteristic sign of the greater part of large exercises over the last fifteen years, and aerial refueling is an integral part of these exercises. So the tanker inventory isn’t enough and can’t be enough under present circumstances, as Izvestiya’s interlocutor in Russia’s VKS described the situation.”

“Tankers are actively used in the course of the Syrian campaign, to support the transport of equipment from Russia to Syria and back, as well as in place: it’s well-known that fighters and bombers regularly carry out missions while on “air patrol” requiring many hours of loitering over the combat area.”

“In conditions of growing activity by Long-Range Aviation, and also the deployment of Russian air units in the North and Far East with their huge expanses, the requirement for tankers has become greater still, both on the strategic and tactical levels.”

“One variant for fulfilling this mission is a return to earlier put-off plans for the production of a tanker on the base of the Il-96 airliner. In the event that the military department turned again to it, this would allow for solving two problems: both to justify expenditures to restart the Il-96 without making it into a commercial airliner for civil aviation, and also, possibly, to avoid the requirement to use Il-76MD-90A platforms as tankers.”

“A potential tanker based on the Il-96, given its dimensions and cargo capacity, could meet the requirement of strategic aviation in the future with an order volume in the realm of 30-40 planes in the coming fifteen years.”

“On the tactical level it would be possible to use existing the Il-78/Il-78M, given the essential repair and modernization of these aircraft, and besides this, the existing Il-76TD/MD aircraft in storage which haven’t used up a significant part of their service lives and allowing for reworking into Il-78M variants could act as a reserve. This would allow for growing the Il-78M inventory sufficiently quickly by several dozen aircraft.”

“In the event the condition of the Il-76 ‘from storage’ is too poor to use it as a tanker, more exotic but fully realizable decisions are possible: for example, development of a Tu-204S ‘tanker’ variant — the cargo version of the Tu-204/214 aircraft, the passenger cabin of which in this case will be used for the placement of additional fuel tanks. This is an established and serially produced type, on which the fuel supply of the tanker variant could exceed 60 tons, that will fully guarantee the requirements of tactical aviation.”

“Since the presence or absence of tankers of a such class can determine the presence/absence of multipurpose fighter squadrons at the necessary place at the necessary time, similar projects have direct economic sense, allowing us to not chase after the number of extremely expensive modern combat aircraft (of which quite a lot are required), increasing the capabilities of aviation sub-units by buying relatively cheap (compared with combat aircraft) aerial tankers based on commercial aircraft.”

“There is a need for this in any case, with the current number in the tanker fleet its capabilities are largely nominal.”

Kramnik makes good (and obvious) points, but there are other things worth knowing to be thrown in here. 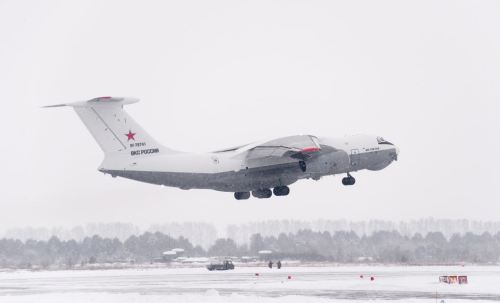 Presumably the Il-78M-90A is the same as the new Il-76MD-90A, but equipped to accommodate fuel storage tanks in its cargo bay and refuel other aircraft when not deployed as a transport.

Visiting Aviastar in August, Deputy Defense Minister and arms tsar Aleksey Krivoruchko said the Russian MOD is considering a contract with the firm for 14 Il-78M-90A tankers to be delivered by 2027. He also indicated that number might grow.

So Kramnik’s call about maybe getting to a fleet of about 30 new and old tankers sounds about right. But, as recently as 2013, the Russian air force was talking about acquiring 30 new tankers.

By the by, the USAF operates something north of 450 tankers, and that’s counting only KC-10 and KC-135 aircraft.