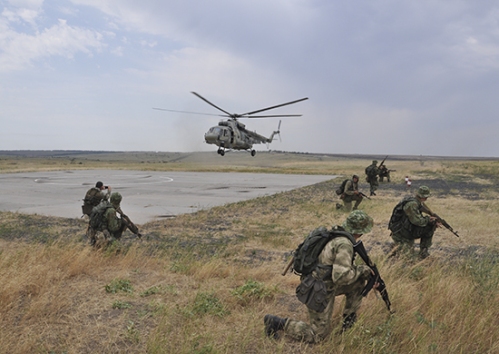 The Ground Troops of Russia’s Southern MD are resurrecting airmobile groups. Recent Mil.ru press-releases have highlighted them. Though clearly still developing, they are far enough along to advertise them.

Shortly after the December 1 start of Russia’s new training year, Southern MD Commander General-Colonel Aleksandr Dvornikov declared that every battalion, regiment, brigade, and division in his AOR will establish and train airmobile groups.

“Up to 40 helicopters of various designations — strike, combat-transport and transport — must support the completion of the combat-training missions of each company tactical group.”

Forty helos is a stiff requirement even for the Southern MD with a brigade plus two independent regiments of rotary wing air support.

Airmobile groups have been established in the Volgograd-based 20th MRB. According to Mil.ru, they have spent a month on the Prudboy range training for tactical air assaults, employing helicopter fire support, landing on different terrain day and night, and using night vision goggles.

The 150th MRD in Rostov oblast has airmobile groups. Mil.ru reported on Mi-8AMTSh Terminator helos flying in support of them. The site indicated that the groups are outfitted with the RPG-7B, AGS-17 Plamya grenade launchers, 2S12 Sani mortars, Igla (SA-18) MANPADS, and Belozer satellite comms.

Airmobile groups sound like platoons, so several groups will probably constitute a company-sized unit for divisions or brigades.

Russian divisions and brigades won’t own helos to support airmobile groups. The MD commander, leading the joint strategic command (OSK) in his AOR, will task his air force component to support them.

Some Soviet divisions and armies had organic squadrons and regiments with Mi-8 and Mi-24 helicopters.

New Russian airmobile groups may not become named TO&E elements, but remain motorized rifle platoons or companies with training sufficient to be designated “airmobile capable” — if only parenthetically.

There’s significant history to this story. The Russian Army lost ownership of its aviation in 2002 when the General Staff gave it to the air force. But, in 2010, all theater air assets came under control of the OSK commander — a Ground Troops general. Then, in 2013, the army surrendered its three air-assault brigades to the Airborne Troops.

So the formation of airmobile groups may be, at least partially, about Russian ground pounders reclaiming some air support and airmobile missions from the other services.

Vertical envelopment wasn’t forgotten in Russia, it just became the exclusive province of the VDV, and to a lesser extent Spetsnaz and Naval Infantry, for a while. General-Colonel Dvornikov appears to be leading the charge to reinvigorate air mobility as a facet of the Russian Army’s tactical doctrine.