Health of the Force

The confluence of recent news stories makes an update on the health of Russian military forces opportune.  As elsewhere in the armed forces, the military’s medical situation seems generally better compared with two or three years ago.

According to Izvestiya, the chief of the Main Military-Medical Directorate (GVMU), General-Major Aleksandr Fisun told the Defense Ministry’s Public Council that illnesses in the army declined 13 percent in 2013.  The illness rate in 2012 had been 40 percent higher than 2011.

The MOD attributes the improvement to better living conditions for soldiers. These include heated barracks, washing machines, shower facilities allowing troops to clean up more than once a week, and socks replacing foot wrappings.

Fisun said, among conscripts, 60 percent of illnesses were respiratory in nature, while about 14 percent involved skin conditions.

Better training for commanders was another factor in cutting the number of sick soldiers.  An MOD spokesman told the paper:

“Work in early identification of illnesses was reinforced — commanders were strictly ordered to send subordinates for initial observation on just the suspicion of an illness.  The condition of everyone hospitalized was reported to [military] district commands.”

Valentina Melnikova of the Committee of Soldiers’ Mothers (KSM) told Izvestiya commanders have been the problem.  However, she said Defense Minister Shoygu has said any soldier not allowed to see a doctor can now turn to military prosecutors for help.

Bmpd.livejournal.com published Fisun’s pie charts from his presentation to the MOD’s Public Council.

There are separate pies for conscripts and contractees.  Respiratory diseases, however, were the largest problem for both groups, accounting for half or more of illnesses.

Fisun also presented data on fitness for service among this spring’s conscripts.

Health of Conscripts in the Spring 2014 Draft

The tabular data shows an increasing number of young men are fit, or fit with insignificant limitations, to serve in the armed forces (73.4%).  Most of that improvement apparently comes directly from decreasing the number of potential soldiers considered to have limited fitness for service (21.6%).

KSM’s Melnikova told Interfaks-AVN that illness was still the major issue for young men facing the spring draft.  She indicated 80 percent of complaints coming into KSM concern unfit men who were drafted.

In Moscow, some conscripts with documented health conditions  were deferred until fall under additional medical observation, but others were told they have to serve now, and had to turn to the courts for relief.

Meanwhile, the GVMU is reportedly amending physical standards for Russian Spetsnaz and VDV soldiers.  It’s lowering the height requirement by 5 cm (2 inches), and increasing the weight limit by 10 kg (22 pounds), according to Izvestiya.

Spetsnaz and VDV may soon be as short as 165 cm (5’4″) and weigh 100 kg (220 pounds).  The new standards will apply for conscripts, contractees, and military academy cadets. 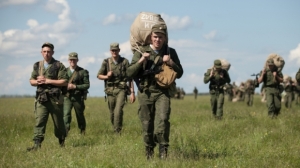 Izvestiya was told a Defense Ministry order officially putting these standards into effect is expected in 2-3 months.  Its VDV source said the increased weight limit is related to use of the newer D-10 parachute which can bear up to 120 kg, so it can support a heavier jumper along with 20 kg of gear.

Perhaps the last, best word comes from Ruslan Pukhov, independent expert and Public Council member.  According to Izvestiya, he recommends increased spending on rear support and logistics, even if it means less expenditure on armaments:

“It’s worth sacrificing a couple nuclear submarines or refraining from construction of corvettes , but don’t economize on people — on their food, medical care and pay.  Iron doesn’t fight, people fight.”

In the wake of General Staff Chief Makarov’s February admission that professional contract service had failed, a Defense Ministry source told Interfaks last week that contractees in noncombat positions will be sharply cut.  According to Newsru.com:

“It’s planned that by 1 July of this year only those specialists affecting combat readiness of military sub-units will remain in contract positions.”

He said this means combat vehicle commanders, driver-mechanics, gunner-operators, and other specialists, and civilians or conscripts will fill other contractee posts.  Lenta.ua noted the source didn’t specify how many contractees would be released or how many would remain.

Some of data cited referred back to a Vedomosti editorial about two weeks ago.  It said, under the 2003 Federal Targeted Program “Transition to Manning by Servicemen Conducting Military Service on Contract in Some Formations and Military Units” for 2004-2007, professional contract soldiers in permanent readiness units were to increase from 22,000 to 147,000 by 2008, and from 80,000 to 400,000 in the armed forces overall.  But in reality, there were only 100,000 in permanent readiness units by 2008, and only 200,000 in the Defense Ministry overall.  Meanwhile, the effort cost 84 billion rubles.  Vedomosti concluded:

“It seems the generals could not fulfill (or sabotaged) the directives of the country’s highest political leadership in peacetime.  Who will guarantee that the generals’ disobedience won’t be repeated in an emergency situation?”

“The Defense Ministry could not organize or make professional service in the army attractive and it sees as a way out stuffing the developing hole with a growing number of conscripts.  It’s understandable that the quality of these one-year draftee soldiers will be lower than that of contractees.”

“The abandonment of the move to a professional army promises many dismal consequences for Russia’s future.  Drafting 27-29-year-old higher educational institution graduates, who are in professional demand, could deliver significant damage to the economy and scratch the country’s modernization.”

So what is to be done?

This spring the Defense Ministry floated several trial balloons to answer its manpower problems.  As Parlamentskaya gazeta reported, the chief of the Genshtab’s GOMU, Vasiliy Smirnov told the Federation Council last month that he wants to increase his conscription base by reducing student deferments, raising the upper limit of the call-up age from 27 to 30, lengthening the semiannual callup until it becomes almost perpetual, and requiring young men to report to voyenkomaty without a summons.  Reportedly, the Kremlin has approved some or all of these proposals.

The Genshtab has proposed cutting the number of VUZy with the right to provide students deferments.  Even though deferments were trimmed in the recent past, Russians still have 21 legal ways to postpone their military service.  Smirnov claimed over 2 million draftees, more than 60 percent of the overall number, legally ‘dodge’ the army with deferments, the vast majority of which are educational deferments.  He continued:

“The number of higher educational institutions in which study is a basis for the right to a draft deferment from military service has to be reduced in stages.  Already this year it would be advisable to cut the number of VUZy having the right to a deferment in half or even by 70 percent, keeping that right only for educational institutions having a state order.  An alternative option could be having students perform conscripted service after the first or second year of studies.  The Education Ministry made this study and sees no negative consequences.”

Noting that voyenkomaty have been unable to notify 200,000 men to report, Smirnov concluded:

“Thus, the existing system of holding citizens liable who for some reason are not fulfilling military service obligation is ineffective today.  We have to change the system of notifying citizens.  In case a person does not receive the notice from the military commissariat, it is proposed that he go to the induction center on his own on the date indicated in the certificate of a citizen subject to call-up for military service.  This procedure functions in many states.”

In other words, the ‘demographic hole’ created by the sharp reduction in male births during the early 1990s is beginning to have its inevitable effect.

Deputy Defense Minister, State Secretary Nikolay Pankov and Main Directorate for Socialization Work Chief Yuriy Dashkin appeared at a Duma roundtable on 31 May to discuss conscription and conscript life.  According to RIA Novosti, Dashkin told Duma members, “Today the armed forces, dealing with a large number of tasks, are forced by the state’s economic condition, by resource provision, to rely still on a conscript army.”  Pankov said he could not give percentage figures on the future mix of conscripts and contractees in the Russian Army.  Soldiers’ Mothers Committee chair Svetlana Kuznetsova expressed doubt that the army will be able to induct 270,000 men as planned this spring.

Trud recently published a number of open letters to President Dmitriy Medvedev, one of which came from Soldiers’ Mothers’ founder Valentina Melnikova.  She asked Medvedev to end conscription, writing:

“Dear Dmitriy Anatolyevich, explain, please, why the Defense Ministry buried the idea of creating a professional army in Russia.   Back in 2003 the government adopted a special Federal Targeted Program on the full manning of all permanent readiness units with contractees.  All together, it was proposed by 2008 to bring into the forces 147,000 professional sergeants, for this 79 billion rubles was allocated.  The Defense Ministry reported that it was managing the task, and promised to increase the number of contractees in the army, and reduce the share of conscripts.  But in the end everything turned out exactly opposite.  At the beginning of this year the military officially stated that the task of building a professional army is being put off for indefinite long term.  As regards conscription into army units, the Defense Ministry intends to take it to 700,000 per year.  It’s simply impossible in Russia to find so many boys fit for military service according to the state of their health.  Almost a third of all conscripts that end up in the army have serious illnesses.  They’ll make just as many young citizens serve who have parents who can’t work.  End conscription and force the generals to create an army not of boys, but of professionals.  And don’t believe the generals when they say Russia doesn’t have the money for a professional army.  Independent experts believe that the state, if all expenditures are considered (pay for voyenkomat doctors, medical evaluation in hospitals, transporting conscripts to their service locations, assistance to soldiers’ wives, etc.), spends 150 billion rubles every year on conscription.  It seems to me that for this money it would be fully possible to maintain a fully contract army in a worthy condition.”