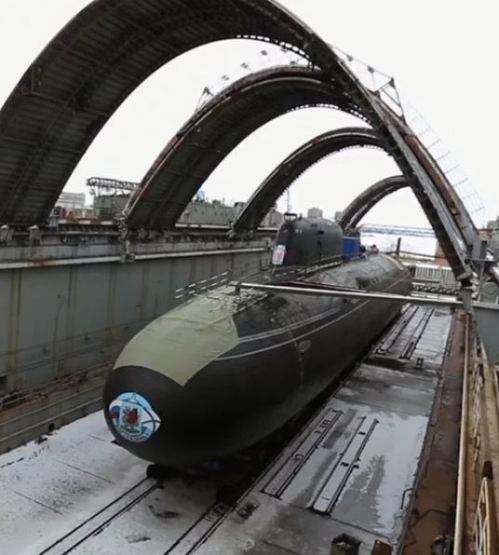 Kazan in the launching dock in 2017

What follows is a translation of Maksim Klimov’s October 22 article in VPK. He writes frequently on naval issues.

“What Do You Ask of an ‘Ash’: Nuclear Submarines Keep the Fleet on Starvation Rations”

“On 25 September the lead nuclear-powered submarine of project 885M ‘Kazan’ went to sea for factory underway trials. This event didn’t go unnoticed in foreign media or ours. Taking into account the fact that the lion’s share of resources allocated to the Navy go to the nuclear submarine fleet, there’s sense in sorting out the real effectiveness of the expenditures.”

“The ‘Borey’ —  ‘Bulava’ program is the megaproject of recent history. A lot of copy about its utility has been ripped up. According to the facts we have, six years after completing state testing of the lead boat and three years after transferring the first series vessel to the Pacific Fleet not a single firing of a ‘Bulava’ SLBM from the Pacific Ocean from ‘Aleksandr Nevskiy’ or ‘Vladimir Monomakh’ has taken place. According to media information, the lead SSBN ‘Yuriy Dolgorukiy’ doesn’t carry a combat load and, evidently, is being used as a floating stand for developing and tweaking ‘Bulava’.”

“We have to bow here to TsKB ‘Rubin’ General Director Sergey Kovalev for preserving the SSBN grouping of projects 667BDRM and BDR, which are today actually carrying out strategic nuclear deterrence missions.”

“In the current state of affairs questions arise as to the utility for Russia of having a naval component of SYaS [trans. Strategic Nuclear Forces]. The problem is all means of the ‘triad’ have their shortcomings and virtues, and the reliability of deterrence is guaranteed by covering the minuses of one with the pluses of the others. In the scope of all deterrence systems it’s sufficient for us to have just one, guaranteed untrackable SSBN. But this, undoubtedly, requires a certain number of them in the fleet’s composition. Because the foundation of strategic deterrence is not range of flight or the quantity of warheads on missiles, but inevitability of a retaliatory strike, the basis of which is the combat stability of naval SYaS.”

“There is an analogous problem with non-nuclear means of deterrence, cruise missiles and their carriers.”

“Taking into account the failure of modernization of third-generation boats a bet has been placed on the grouping of new project 885(M) nuclear subs. It would seem logical since the missile salvo of project 885 exceeds the American ‘Virginias’ and even the Western media is crying about a ‘new Russian threat’. The problem is only that there aren’t enough missiles on project 885 boats for effective deterrence, and the carrier itself is too expensive and low-volume. If we call a spade a spade, creating an effective system of non-nuclear deterrence on the basis of project 885M nuclear subs is far beyond the bounds of the state’s economic capabilities. Moreover, we still have to go to the volley point. This is precisely where the main problems begin.”

“Won’t Hold Up in Battle”

“Traditionally they say quietness is the main quality of a submarine. What does this actually mean? The foreign comparative graphic [trans. link added] of the reduction of noise in USSR (RF) and U.S. submarines is well-known. Comparing this graphic with data on the noise of subs of the first-fourth generations it’s obvious that the given levels for our fourth-generation lag U.S. Navy multipurpose nuclear submarines by not less than 10 decibels.”

“Project 885 ‘Yasen’ is the only modern multipurpose submarine which retains the propeller screw, all remaining ones have gone to water pumpjets. The reason is requirements for significant increases in low-noise speed, up to 20 knots. But as research shows, at the same noise level, the speed of ‘Severodvinsk’ and ‘Kazan’ is, obviously, much lower than that of the American ‘Virginia’ and ‘Seawolf’ [trans. SSN-774 and SSN-21 classes respectively]. And this is an extremely serious tactical flaw, the consequences of which are not fully understood by us.”

“Meanwhile now our ‘partners’ [trans. the U.S.] are developing new ways of detecting submarines. Submarine officers in Severomorsk laid down the flight track of an American ‘Orion’ reconnaissance aircraft on a map of the disposition of our nuclear submarines in the course of exercises. And all ten turning points of its route precisely followed the disposition of our submarines. In fact it didn’t even search, but went to the exact point. The ‘Orion’ went precisely to our nuclear submarine without any tacking, dropped a buoy and went to the next one.”

“The scope of threats from enemy aircraft aren’t recognized by us because domestic anti-submarine aviation is catastrophically behind the foreign level. The concept of even the newest Russian airborne search-targeting systems are from the 1970s. ‘Novella’ (‘Leninets’), as was officially announced, guarantees ‘an increase in the effectiveness of the Il-38 by four times.’ The problem is the Il-38’s capability against low-noise submarines was close to zero.”

“Even in 2010 Rear-Admiral Anatoliy Lutskiy  wrote that it was proposed to equip ‘Yasen’ and ‘Borey’ submarines with torpedo defense systems which had technical tasks for development put together back in the 1980s. Moreover, the results of research into the effectiveness of these means against modern torpedoes attest to the entirely low probability that an evading submarine could escape destruction.”

“Since then two generations of torpedo weapons have been replaced, and there’s obviously no need to talk today about the possibility of effectively employing drifting systems of the ‘Vist’ type or the extremely expensive ‘Udar’ for anti-torpedo defense. The situation has only one solution — conducting objective testing together with new torpedo types. However, the consequences for the pair of them are obviously devastating, so simply no one will allow the testing.”

“What Is To Be Done”

“We aren’t simply investing huge amounts of money in combat systems of dubious effectiveness, but also tearing them away from education, science, and rearmament of the ground forces where there is still a difficult situation with combat equipment. In the Navy betting on submarines keeps surface ship construction on a starvation diet. It has led to the stagnation of naval aviation.”

“During development of proposals for ‘Basic Directions for Development of VVST [trans. Armaments, Military and Special Equipment] to 2030’ the author raised the question of conducting proactive R&D into weapons and countermeasures for fifth-generation submarines. This is acutely important since there are a number of fundamental points regarding the appearance of a weapon which directly influence the construction of submarines. To do it ‘the old way’ is to lay down a growing lag in our submarine fleet.”

“To resolve the critical problems of the Navy’s submarine forces it’s essential firstly to conduct special testing and research exercises. Until they are completed the construction of nuclear-powered subs could be significantly reduced for the redistribution of limited financial resources to higher priority and more critical directions of defense organizational development — surface ships and aviation.”

There’s a lot to think about here. Watch for Part II. 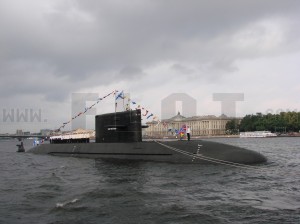 In honor of Navy Day — the 315th anniversary of the Russian Navy’s establishment — here are this week’s sound bites from Navy CINC, Admiral Vladimir Vysotskiy.  RIA Novosti will publish a complete interview with him tomorrow.

Vysotskiy says the Navy expects “not less than eight” proyekt 885 SSNs by 2020.  Some sources maintain the number is six.

Unit 1 Severodvinsk is preparing for sea trials in August, and unit 2 Kazan is expected by 2015.  They’ll have to pick up the pace to get eight by 2020.

Vysotskiy says work on a new destroyer will begin in 2012, and be completed in 2016.  This is the one he suggested might be nuclear-powered.

The CINC’s other comments covered the Black Sea Fleet.

He claimed the BSF will get six proyekt 636 diesel-electric submarines in the coming years.  Its sole submarine now, proyekt 877 Varshavyanka-class SS Alrosa is currently in the Baltic for repair.

RIA Novosti recalled Vysotskiy’s past comments about obtaining 15 frigates and diesel submarines for the BSF by 2020 in a 60-30 proportion.  He also said a frigate and submarine were specifically laid down for the BSF in 2010, and would be every year henceforth.  He claimed the fleet would be renewed by 2020 through new construction rather than inter-fleet transfers.

Moskovskiy komsomolets and Newsru.com reported on the BSF’s drastic ten-fold decline since 1997.

This week TsAMTO cited a Baltic Fleet press release saying it expects to get the Neustrashimyy-class FF Yaroslav Mudryy, proyekt 20380 Steregushchiy-class FFLs Steregushchiy, Soobrazitelnyy, and Boykiy, proyekt 677 Lada-class SS Sankt-Peterburg, as well as assault ships and other craft.  The BSF may be expecting to get some of these ships as well.

Your typical good news, bad news story . . . happily for the Russian Navy, the Severodvinsk is nearing its first at-sea testing, but the new submarine has also been held up as a prime example of outrageous price increases in this year’s state defense order.  Final delivery of this SSN, as well as the first two Borey-class SSBNs, represents a big part of troubled GOZ-2011.

A very precise Mr. Pyalov says Severodvinsk is currently 98.9 percent complete.  He thinks the Navy will accept the new boat before year’s end and, in all, six of these multipurpose submarines will be built.  The second proyekt 885 Kazan is slated for delivery in 2015.

RIA Novosti says proyekt 885 is a double-hulled, single-shaft boat with a reduced acoustic signature.  The conning tower has a streamlined, oval shape.  The boat is divided into ten compartments.

For the first time, according to RIA Novosti, Russian designers put the submarine’s torpedo tubes amidships to allow for a new bow-mounted sonar system.  Proyekt 885 has eight vertical launch tubes for supersonic cruise missiles.  It has new communications and navigation systems as well as a fundamentally new nuclear power plant, according to the news agency’s report.  The new submarine is said to be first in noise reduction and stealth among attack submarines worldwide.

But the Severodvinsk couldn’t evade detection in the furor over breakdowns in the state defense order.

Earlier this month, RIA Novosti reported on disputes between the United Shipbuilding Corporation (OSK), submarine-builder Sevmash, and the Defense Ministry over naval construction in this year’s GOZ.  In particular, the military accuses the builder of doubling its prices for proyekt 955 Yuriy Dolgorukiy and proyekt 885 Severodvinsk.

An OSK spokesman defended Sevmash saying the cost of its work on Severodvinsk is only 30 percent of the total price, with the balance being the cost of armaments and components supplied by several dozen enterprises.  He blamed inflation in the industrial sector and the economy more generally.

“They are giving us an increase in prices on new orders, and, naturally, we don’t agree with this.”

But, he added he’s convinced the Defense Ministry will persuade the producer to lower its prices.

Izvestiya mentioned that Severodvinsk was originally intended for a production run of 30 submarines, now reduced to six more than 20 years later.  As recently as March, the Navy still publicly hoped for ten.

“Of course, the price will grow if, in the cost of one ship [sic], they include all accompanying expenditures on other enterprise projects in no way connected with it, like maintaining kindergartens, infrastructure, etc.”

“We’re prepared to pay, but on the condition that the price formation process will be transparent.  As practice shows, if all articles in the contracts are “decoded,” then it seems it’s possible with confidence to deduct up to 30% from the final cost of a finished product.”

These must be bitter words for an enterprise that went many, many years without completing its trademark product — a nuclear-powered submarine.

A Sevmash source says the cost of submarine construction is directly related to higher prices for materials, energy, and integration:

“The entire range of equipment for a submarine is supplied by monopolistic companies trying to dictate their prices.”