The deck of generals has been shuffled somewhat.  But fairly little notice was given to the mid-June reassignments of General-Colonel Vladimir Zarudnitskiy, General-Colonel Nikolay Bogdanovskiy, and General-Lieutenant Andrey Kartapolov. 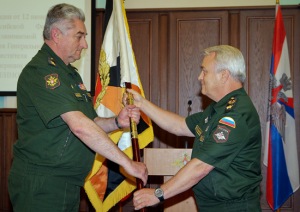 Zarudnitskiy’s background is pretty well summarized here.  He is 56. 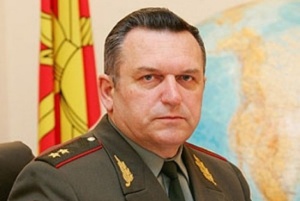 Bogdanovskiy’s had an interesting career path.  He commanded an army in the Far East before becoming a deputy commander of the old Far East MD.  He served as First Deputy CINC, Chief of the Main Staff of Ground Troops.  He commanded the old Leningrad MD.  He was again a deputy CINC of Ground Troops and Chief of the Main Combat Training Directorate from early 2011 until his late 2012 assignment to the Central MD.  Bogdanovskiy was early rumored to be a candidate to replace General-Colonel Chirkin as Ground Troops CINC.  He is 57. 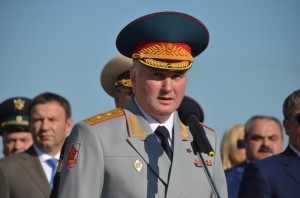 The most cursory review of Kartapolov’s career shows he was an O-6 commanding a machine gun-artillery division in the Far East in the early 2000s.  In 2007, he served as a deputy commander of the Novosibirsk-based 41st CAA.  He then became First Deputy Commander, Chief of Staff for the 22nd CAA in Nizhegorod.  In 2010, he commanded the 58th CAA, and in early 2013 became a deputy commander of the Southern MD.  After a very brief stint as First Deputy Commander, Chief of Staff of the Western MD, he will head the GOU.

Kartapolov’s wiki bio says he served as chief of an unidentified GOU directorate in 2009-2010.

But GOU chiefs of late still seem more “from the troops” than “born and bred” General Staff officers. 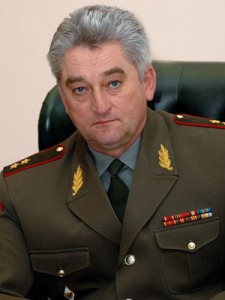 Recall 52-year-old two-star Tretyak was one of the “general troyka” whose early departure from the army was debated in the media this summer.

Taking Tretyak’s place at the GOU is General-Lieutenant Vladimir Borisovich Zarudnitskiy.  Here are some of his particulars courtesy of RIA Novosti.

The 53-year-old general-lieutenant was born on February 6, 1958 in the Abinsk, Krasnodar Kray.

When the six existing MDs were reformed into four, and the Moscow MD disappeared, Zarudnitskiy was assigned as deputy commander of the Southern MD until his appointment as GOU Chief today.

Zarudnitskiy’s a troop general, not a staff officer.  Like several other generals who’re moved upward, he served some time directly under General Staff Chief Nikolay Makarov in the Siberian MD.

Once larger in size and stature, the GOU must be a tough assignment these days.  Zarudnitskiy is the organization’s fourth chief in four years.

The paper describes these guys as the Russian Army’s future leaders.  So why do they want to quit?  The reasons, unfortunately, haven’t been advertised (yet).

NG points out that, if Tretyak leaves, the GOU (the cerebral cortex of the “brain of the army”) will have its third chief in four years.  Skokov has been a key man working on automated C2 (YeSU TZ or ЕСУ ТЗ).  A “highly-placed” anonymous officer says it’s because of their disagreement with army reform steps taken by Makarov.  And explicitly not because of any problem with Defense Minister Serdyukov, whom they regard as an effective manager.

They feel the Armed Forces, during Makarov’s tenure, have been in a provisional, experimental state, living on projects and according to unconfirmed directives (basic instructions and combat regs).  And after three years of “development,” the Genshtab Chief still can’t determine their final shape.  There are no confirmed decisions on service or branch TO&E structures, or their basing areas.  NG’s anonymous contact says the condition of the troops, and their “fantastic” combat training about which Makarov likes to talk, is “a fiction, which could be the topic of a separate conversation.”

The source implies time, money, and other resources have been wasted trying to develop automated C2 for old-fashioned, World War II-type operations.  And this is why Skokov requested his discharge.

NG’s sources believe this “scandal” will have political consequences.  The paper wonders whether President Medvedev will choose to get involved.  A source claims Deputy Defense Minister Nikolay Pankov is supposed to meet with the generals who want to quit, and discuss their problems with Makarov “from the point of view of the state’s interests.”

In today’s Krasnaya zvezda, the new Main Operations Directorate (GOU) chief speaks on the anniversary of his organization.  On 20 February, the GOU will trace its lineage back 308 years to Prince Shakovskoy.  Shakovskoy was general-quartermaster in 1702 (early in Petr Velikiy’s Great Northern War) and he began the establishment of organs of operational command and control with the basic missions of preparing proposals for planning troop employment and providing command and control during combat.

Tretyak says the missions standing before the GOU today are imposing and large-scale.  The GOU has to help transition the armed forces to a new level, and create a modern, combat-capable, and mobile army that won’t allow anyone the chance to threaten Russia or its allies.

He continues saying the deep transformation of the army was objectively necessary and the short period for the transition was dictated by the development of ‘leading armies’ and the threats facing Russia.  In 2009, the shift to a three-layer command system and permanent readiness formations and units was completed.  Tretyak says the tasks today are to complete their combat coordination (слаживание) and installations (обустройство).

Addressing the world geopolitical situation, Tretyak says, although a large-scale war is a low-probability event, many other threats have appeared.  For instance, the widening of conflict zones into areas that affect Russia’s vital interests.  He cites South Ossetia as an example.

So the General Staff constantly analyzes and evaluates the world’s military-political situation and develops practical measures to keep the armed forces ready to carry out their missions to guarantee Russia’s military security.  The main part of this job falls on the General Staff, responsible as it is for strategic planning, military organizational development, armed forces development, and the military organization of the state overall, as well as for coordinating the activity of all troops and military formations in the area of defense.

The General Staff works with the country’s military-political leadership, federal executive organs, other state and military structures, and with the defense-industrial complex.  According to Tretyak, the most important role in this connection goes to the GOU, the history of which is inseparable from that of the Russian Army and the General Staff.

All this sounds a bit doctrinal and it is, but it gives the new top man’s view on how and where his people fit in.  It’s a bit like the new boss issuing a mission statement.

After a longish history lesson, Tretyak reminds that great military leaders have come from the post he now occupies.

Of course there’s nothing about his most recent predecessors Rukshin and Surovikin.  They didn’t fare terribly well.  And there’s the near-debacle in the five-day August 2008 war, i.e. many press reports saying that the GOU had been moved out of its spaces and just dismissed Rukshin had to be begged to run a lot of the war effort.  Afterwards, many have claimed it was the planning previously done by Rukshin that kept the war from becoming a total fiasco for Moscow.  And there’s nothing about cutting the GOU from 550 officers to 150 while its workload is unchanged, or perhaps even increased.  See Segodnya.ru for reporting on this.  Tretyak’s got his work cut out for him.