Originally intended for another purpose, so it’s a tad dated.  Perhaps still useful to some . . . 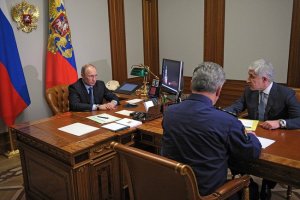 Russian President Vladimir Putin conducted six meetings on key arms programs from 27-29 November in Sochi.  He focused on strategic systems in his public remarks before the sessions.

The Russian president said it is “not necessary to say much about how important the naval part of the triad of strategic nuclear deterrence is for us.”  New Borey-class SSBNs Aleksandr Nevskiy and Vladimir Monomakh need to enter service next year as part of a contingent of eight new SSBNs by 2020, he said.  Not mentioning the failed launch of a Bulava SLBM in September, Putin tersely commented, “The armament [Bulava] should arrive in step with its launchers, these submarines.”

Putin called for “active” work on the new PAK DA strategic bomber, and modernization of existing Tu-160 and Tu-95MS bombers.  OAK chairman Mikhail Pogosyan replied that the Defense Ministry has given the corporation the technical task for PAK DA, and the company is preparing for R&D starting next year.  He said OAK is almost ready to submit modernized Tu-160 and Tu-95MS bombers for state testing.

Turning to aerospace defense, Putin said two ‘regimental sets’ of S-400 SAMs were fielded this year, and three should reach the forces in 2014.  Almaz-Antey general designer Pavel Sozinov told the Russian president that the S-500 SAM system is approaching the “finish line” with testing planned in 2014-15, and the new medium-range S-350E Vityaz should reach units in 2015-16.  The first production lines in new Almaz-Antey plants in Nizhny Novgorod and Kirov will begin operating in 2015, according to Sozinov.

Putin addressed well-known problems in Russia’s space sector, noting that failures have brought significant material losses.  Some military space projects are drifting despite stable financing, he added.  He noted that five military satellites have been placed in orbit, and five more will be in 2013.  Six satellites will be orbited next year, Putin said.

Concluding the meetings, Putin reminded assembled military and defense industry leaders that Russia’s defense budget has increased four-fold over ten years.  He said this money was allocated to guarantee the country’s defense capability for the long-term future, and established tasks must be completed on schedule.  He plans to hold another rearmament review in six months. 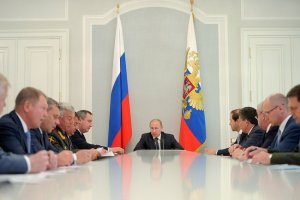 Today’s meeting on implementing GPV-2020 (the third thus far) was devoted to nuclear forces and aerospace defense.  However, President Vladimir Putin had little specific to say, at least in his published remarks.

He obligatorily noted how VVKO and especially SYaS bear “special responsibility” for Russia’s security, territorial integrity, and global and regional parity and stability.

VKO, the president said, must not only be in permanent combat readiness to defend military and state command and control facilities against a potential enemy’s attack, but also “provide clear and effective coordination with other services and troop branches.”

In other words, lots of air and aerospace defense assets don’t belong to VVKO, and their job is to integrate them into a network.

On the nuclear side, Putin said Russia isn’t looking for an arms race but rather to ensure “the reliability and effectiveness of our nuclear potential.”

To reequip SYaS and VKO, the Supreme Glavk indicated Russia intends to allocate a “significant part” of the total resources for GPV-2020, but, again, nothing more specific.  By 2020, SYaS is supposed to have 75-80 percent modern weapons systems, and VVKO not less than 70 percent.

And that’s all we learn about the meeting.  Or almost all.

Kremlin.ru provided a participant list that’s a bit interesting.  Many officials and industry leaders you’d expect attended.  But some were noticeably absent — missile designers from MIT, missile builders from Votkinsk, and the RVSN Commander.  Surprisingly, the general director of the Makeyev design bureau was present.

Aleksey Nikolskiy in Vedomosti reports that Bulava testing will resume this summer.  He says the problem in December may have been a defect in the third stage engine, not a design flaw.

Tests may resume this summer from the modified Dmitriy Donskoy SSBN.  Yesterday ITAR-TASS reported a minimum of two tests would be conducted from Donskoy.  If successful, testing would move to the missile’s intended platform, the new Proyekt 955 Yuriy Dolgorukiy, this fall.

A Navy Main Staff representative told Vedomosti that Dolgorukiy would need to fire several missiles in a salvo launch.  An industry source said, if all these tests were successful, a “preliminary document on completion of the first phase of testing” could be signed and serial production of the missile could start.

The Defense Ministry and OPK commission investigating the December failure has provided optimism for those involved, according to a source close to the commission.  In his words, a third-stage thrust control mechanism produced by the Perm-based NPO Iskra failed in the December test.  So some conclude the missile’s overall design is sound and it makes sense to continue work on it.

Mikhail Barabanov says “shock work” on Bulava might be risky, since MIT already promised that it could produce the missile quickly and cheaply.  Konstantin Makiyenko reiterates the lack of an alternative missile to keep a naval component in Russia’s strategic nuclear forces.

Denis Telmanov in Gzt.ru adds that a Defense Ministry source has not excluded the possibility that another design bureau, possibly Kolomna Machinebuilding, has gotten orders to work on a missile.  The Makeyev GRTs is another possibility, but its deputy general designer responded that quick development of a missile was physically impossible.  He said, even from an existing system, it would take 5-6 years.  And he said no one in the country’s leadership has taken a decision to start work on a new missile.

All stories repeated the expressions of support for Bulava from the Defense Minister and Navy CINC.