The photo above appears to be Kirov-class CGN Admiral Nakhimov (ex-Kalinin) having its superstructure dismantled at Sevmash.  Topwar.ru didn’t indicate how it came by the picture.

Blogger Aleksandr Shishkin recently offered his rationale (and that of other navy advocates) for repairing and modernizing Admiral Nakhimov.

As a shipbuilder, Shishkin says the “enemies of these monster-ships” think that the extraordinary expenditures required to renovate Nakhimov could be redirected to better use for the Russian military.  But he contends that Russia’s nuclear-powered guided missile cruisers have a disproportionate military-political effect when compared to other ways of spending this part of the MOD budget.

He argues that Nakhimov provides more “bang for the ruble” measured against new surface combatant construction.  He offers as an example the proyekt 20380 Steregushchiy-class corvettes of which five, with a total of 100 missiles, can be bought for Nakhimov’s price.  Two and one-half proyekt 22350 Gorshkov-class frigates can be bought for Nakhimov’s price.  Three Gorshkovs have 144 missiles. Or, for the cost of Nakhimov, one future proyekt 23560 (Lider) destroyer with approximately 136 launchers could be bought.

That is, according to him, “twice-three times the quantity of similar and more powerful weaponry for the same money plus the possibility of using [the ship] anywhere in the world.”

Second, Shishkin argues for Nakhimov’s political effect.  Its return will keep Russia in a “firm second place” in the world navy “table of ranks” which carries a psychological impact “no one should underrate.”  Showing the flag promotes Russia as an alternative to the U.S. as the world’s lone superpower, according to him.

Nakhimov or no Nakhimov, many would argue China is the world’s second-ranked navy.

Third, the blogger maintains that reconstructing Nakhimov raises Russia’s “sense of self-worth” by showing that it can build [or rebuild] really large ships, not just patrol boats.

Fourth, he asserts that Nakhimov will be ready (2018-2019) earlier than new corvettes, frigates, and destroyers that won’t be delivered until the early 2020s.

Fifth, Shishkin says Sevmash’s work on a “first-rank” nuclear-powered ship like Nakhimov will prepare it to build aircraft carriers or to compete with Northern Wharf for destroyer contracts.

So none of this comes cheaply.

It’d be interesting to read an argument for Admiral Nakhimov addressing how the ship will figure in future Russian fleet operations and larger military strategy. How will it operate in defense of Moscow’s naval strategic nuclear forces, or in more likely contingencies short of this? 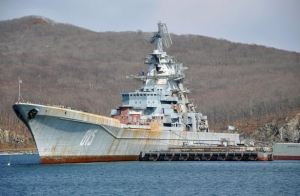 Admiral Ushakov and Admiral Lazarev remain in reserve in different states of decay and are very unlikely candidates for modernization.  Petr Velikiy will, at some future point, probably undergo the work currently being done to Nakhimov.

In Friday’s NVO, CAST Director Ruslan Pukhov expounded on Konstantin Makiyenko’s thoughts about whether Russia’s current military modernization plan is doable.  And he offered ideas on how to make it more doable.

Pukhov points out that, in addition to 19 trillion rubles for military modernization, the Kremlin is footing bills for higher military pay, better living conditions, and housing as well as intensified combat training.  Liberal critics question whether the government can afford a greater defense burden at a time when it also needs to modernize infrastructure, health care, and education.

Still, he says, skeptics have a point.  Vladimir Putin’s plan presupposes a decade of growth in the economy, perhaps not dynamic, but growth.  However, it’s also highly possible we’ll see stagnation or even recession in an economy which, with oil prices over $100, shows meager (for a developing market) growth of four percent.

Then Pukhov really gets to it.

With the slightest decline in hydrocarbon prices, “Putin’s preelection promises, including also in the military sphere, will become unfulfillable.”  And the Finance Ministry is developing plans to trim defense spending by 0.5 percent of GDP.

Pukhov asserts the Defense Ministry can continue transforming the armed forces if it sacrifices quantity for quality and foregoes more “metal” for human capital investments.

First, he says abandon the official but never explained million-man army manning level in favor of 700,000 or 600,000 personnel.

Second, the state should meet all its social obligations to servicemen and continue training by skipping some procurement.  The only “holy cow” would be strategic nuclear deterrence forces.

But Pukhov doesn’t sound fully convinced himself.  Some points not made need to be noted.

Pukhov should know Moscow has already gone well below one million men, if only semi-officially.  There isn’t much savings in reduced conscript numbers.  Pukhov doesn’t mention the huge “human capital” expense of trying (once again) to recruit professional contract soldiers.  The word corruption — the proverbial elephant in this room — isn’t uttered either.  The state already accepts 20, perhaps 40, percent less military than it pays for.  That’s where real savings are.  Foregoing some “metal” is a good idea, but Pukhov has scarcely begun to sort out what Russia’s acquisition priorities should be.

Mr. Pukhov should be commended for addressing this topic, but his critique is pretty mild.  He may still be attacked for it by some.  A much more radical restructuring of Russia’s military development program than Pukhov’s may eventually be needed to save it.