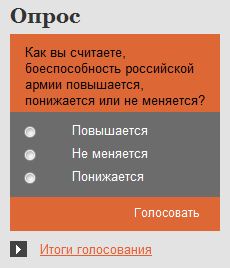 To this particular question, 78 percent of respondents said its combat capability is decreasing.

Stepping back a bit, clicking on Sociological Center goes to a narrative explaining a little about it.  Its purpose is monitoring social processes in the military to work out scientifically-founded proposals on the morale-psychological support of military organizational development, training, and employment of the Armed Forces.  It also provides information support to commanders, staffs, and personnel officers.  The Center is charged with collecting data about the socio-economic circumstances of servicemen and their families.

The military opinion surveying effort has been around for a while.  During the first big push for contract service beginning in 2003, Defense Ministry pollsters actively asked contractees, or prospective ones, what attracted or discouraged them from signing up.

We’re not told how or when these survey questions were asked.  They’re likely Internet polls rather than more scientific random sampling.

But one still admires the brutal honesty of publishing these results.  They don’t accord with what Defense Minister Anatoliy Serdyukov wants to see or hear three years after launching military reform.  They indicate how far the Russians have to go to turn around the perception, if not the reality, of life in the Armed Forces.  At the same time, getting feedback is a critical step in correcting their problems.

Your author has regrouped the survey results on various questions thematically.  In the interests of brevity, only the answer with the highest percentage is shown.

On law and order in the ranks:

On personnel, pay, and benefits:

The responses on the army’s capabilities weren’t new.  One is surprised, however, at how negative respondents were on premium pay, how little they expect from higher officer pay, and the lack of any improved perception of the prestige of military service.

Segodnia.ru recently publicized a report entitled Armed Forces:  Year 2010, prepared by the Center for Strategic Assessments and Forecasts (TsSOiP or ЦСОиП).  It interviewed one of the report’s authors – retired Colonel and Doctor of Technical Sciences, Aleksandr Fomin – about the state of Russia’s military and threats to Russia.

How does one characterize Colonel Fomin?  In this interview, his thoughts range from a little far right to far left / neo-Marxist.  Yet he sounds like President Medvedev in 2009 calling for a new world financial order to break the dollar’s hold on the international economy.  But that resemblance disappears once he starts excoriating Russia’s elite — co-conspirator in U.S. domination of Russia.

He generally argues the dollar’s inevitable collapse will lead to conflict or war, for which Russia is poorly prepared.  His arguments will appeal to some, but they represent a somewhat simplistic view of international economics and finance.  The rest is a short geopolitical treatise we’ve heard many times about how Russia arrived in its current condition.

Take heart, however, the analytical report is more interesting and original, but it’s 40-odd pages, so some patience on your part will be required.

By way of foretaste, on with Fomin’s interview . . .

“There’s a myth that the incredible militarization of the country and rebirth of its military might almost to the level of the Soviet Union has happened in recent years.  This doesn’t correspond to reality – in reality, as the analysis shows, the Russian Armed Forces have degraded.”

“If we look at the trend of general financing of the Armed Forces for the last 10 years , adjusted for inflation, then we get as a true expression of the financing volume are 4% increases per annum on average.  At such a growth rate, it’s possible only to offset depreciation, but not guarantee the development of the armaments system.  Now recall corruption, and you find that in reality the Armed Forces didn’t develop, but degraded.”

“Today, in the spirit of political correctness, it’s believed that Russia’s main military enemy is international terrorism. They’re ashamed to identify the U.S., NATO, and China as the real potential enemies.  But if we call things by their names, then today Russia is inferior to these probable enemies in the size of its Armed Forces by 20 times in the West and 35 times in the East.”

We’ll have to read his full report to figure out how he came up with these numbers.

Fomin goes on to say that Russia’s nuclear weapons won’t save it either, since Moscow’s elite keep its money, and educates its children, in the West.  He concludes flatly:

“It is very probable that Russian nuclear weapons will never be employed.”

Next Fomin constructs his scenarios for future wars and threats to Russia:

“In the coming decades, and possibly, years the U.S. and EU’s problems with China will inevitably sharpen, the cause of them is the struggle for energy resources.  Iran, Pakistan and . . . Russia will be drawn into this confrontation.  They will start to use our country as a buffer in the military resolution of the China problem.”

The interviewer asks Fomin what threatens Russia externally, what geopolitical positions has it lost, which ones does it still hold?

“The main threat not just to Russia, but also the world as a whole comes from the virtual world financial system, based on the American dollar, which for a long time already hasn’t been supported by real assets and is held up only by U.S. military might, the potential of which allows them to oppose everyone else in the world.  But sooner or later this system will collapse, for internal reasons.  But however the collapse occurs, its agony (possibly the current financial crisis is the beginning of this agony) could plunge the world into the Third World War.”

“As already said above, today Russia is practically undefended.  Its political leadership, like the appanage princes of Rus in the 12th -13th centuries, are trying to hold off threats  by means of multibillion tribute payments allegedly into international reserves.  However, in Russia the easily accessible oil, could soon be gone:  according to expert evaluations, 30% of wells are already unprofitable.  Then Russia will simply be of no interest to the rest of the world . . . .”

“If we talk about Russia’s lost geopolitical positions, then of course – this is NATO’s expansion to the East, the reinforced U.S. role to Russia’s south (Afghanistan, Iran, Pakistan, Georgia).  It’s possible to add the real threat of losing the Far East and Siberia to this.  They [NATO and U.S.] managed to spoil [Russia’s] relations with Ukraine, Belorussia, and Iran.”

Asked about the threat that Russia is becoming ensnared in U.S. “anti-Iran” policy, Fomin responds:

“. . . the U.S., economy of which is based on proliferating the dollar throughout the world and managing oil prices, has a very painful relationship to [Iran’s] nuclear energy development – to oil’s energy competitiveness.  Especially in the Near East.  In its relationship with Iran, Russia turns out to be hostage to its own financial system:  if the country holds its reserves in other countries’ hard currency, then it can’t oppose them on their main positions in the military-political sphere.  Some disagreements are possible, but there can’t be a lengthy tendency toward the complication of relations – in the case of a sharp worsening it would be easy to block hard currency accounts.”

“And, Russia for 20 years already has been unable to conduct an independent foreign policy, since it is tightly integrated into the world economic system dominated by the U.S.”

“Russia risks losing the remains of its authority among Muslim countries, after abrogating its earlier agreed supply of defensive weapons (in the first place, S-300 surface-to-air missile systems) to Iran.”

“External threats have been discussed above.  To this it’s possible to add that, as a result of the actions of the financial authorities of the G20 countries, the fundamental bases of the current crisis haven’t been eliminated.  Because of the fact that some paper (toxic assets) has been traded for others (newly printed dollars, euros, and pounds), the situation hasn’t changed principally.  The disease has been driven inside and its symptoms are still appearing to a lesser degree.  But it definitely will crawl outside again.  Therefore, the financial-economic crises will continue further.  Sooner or later the American dollar unsupported by real assets, as a world currency, must collapse.  Several types of dollar exist already now — for internal and external demand.  The Americans are trying to do everything possible meanwhile to ‘save face.’  Provoking situations to create the objective appearance of a reason for the collapse of the dollar are possible:  a terrorist attack on the U.S., war in the Near East, aggravation of the situation in the Far East.  A new world war which will be catastrophic for Russia as an extreme case.”

“Now about internal threats.  For clarity, in every case, we are distinguishing two understandings:  country and state.  It’s possible to love your country while being critical toward the state, which imagines itself as society’s management apparatus.”

“If we talk about the country as a whole, then the main internal threats are well-known:  complex demographic situation, a lopsided well-developed raw materials economy, low labor productivity, conditioned by the low wage level of labor, proliferation of narcotics, brain drain abroad, degradation of science, culture, education, health care, pensions, national defense, law and order, agricultural economy, neglected transportation and ecological problems, corruption.  In the coming decade, the aggravation of energy problems, connected with the exhaustion of easily accessible supplies of Russian oil.”

“But there is still one more serious problem which is the source of all the rest.  This is the multibillion outflow of capital from Russia, including into so-called international reserves (it’s simpler to say into the financial systems of Western countries).  It bleeds the entire economy, and doesn’t allow for moving off a dead stop in solving the majority of urgent problems.  If there were no capital outflow, many internal Russian threats would be eliminated in some time.”

Fomin goes on to argue that current capital outflow (legal and otherwise) is more burdensome and damaging to Russia’s economy than tribute paid to the Mongols centuries ago.  He says international reserves accumulated in 2010 could have plugged the gap in Russia’s pension fund.

Fomin now turns to internal threats to the state.  Number one is the populace’s increased protest activity.  He says the average Russian understands clearly that the state exists not to improve his welfare, but only the quality of life of 1 percent of Russians, without, of course, provoking large-scale protests from the other 99 percent.

Among other threats, he cites hypertrophic centralization and underdeveloped local government, inflation caused by capital outflow, low wages, and unemployment all leading back to protest activity.

Fomin notes that Russia dropped to 154th (from 146th) on TI’s international corruption index this year.

He observes that the Russian government failed the test of August’s forest fires, causing a mortality spike equal to the number of men lost by the USSR in Afghanistan.  He calls Prime Minister Putin’s web cameras for monitoring the rebuilding of housing a symptom of the level of Russia’s corruption and ungovernability.

Fomin goes on to label major internal problems — education, health care, agriculture, housing, national defense, culture, science, ecology — the first four he notes are ‘national projects.’  Agriculture he puts on the level of military security in importance.  But rather than develop it, the country’s elite chooses to buy food abroad with oil and gas profits.  Agricultural imports support the livelihood of many middlemen in the process.

Fomin has one last assessment of Russia’s current elite class:

“At present, Russian state authorities and the so-called ‘elite’ view the country as a private firm working solely to get profits and the sooner, the better.  Profit is the main goal of the private firm.  It’s not for the realization of long-term goals.  Its main mission:  collect capital, send money abroad, make itself comfortable, and invest the money in a profitable business.”