One retired Colonel A. A. Karasev, deputy of the Saratov city duma and chairman of the Saratov branch of the Union of Soviet Officers, has written in KPRF.ru about communists and former servicemen picketing Prime Minister Putin’s reception office in Saratov on 17 February.

According to him, they demonstrated their concern about ruinous army reforms and carried signs saying “Putin!  Return Serdyukov to the Furniture Store.”  And, of course, they addressed an open letter to Putin.

Their letter said they’d taken to the streets before what used to be Soviet Army and Navy Day to make their woes, pains, and demands known to the head of government, and to defend the army, OPK, veterans, and their families from the outrages committed by bureaucrats and Duma deputies.

They want all these problems rectified, of course, but want to start with firing Serdyukov and his team.

The tension over what they’ve termed ‘sergeantization’ is interesting.

In the Defense Ministry’s view, officers who’ve been cut, or turned into sergeants themselves, either weren’t needed or weren’t performing officer work or supervising troops.  So officers have been cut, and those that remain will really be officers with real units to command.  Some of them will get premium pay to reward them for now, and, from 2012, much higher base pay, for example, maybe 60,000 rubles for a lieutenant.  Meanwhile, as the Defense Ministry sees it, there won’t be any problem with newly-minted professional sergeants entering the ranks and earning higher pay [which still won’t approach that of officers].

The KPRF has an alternate scenario for the future.  It sees many officers, who were needed, put out of the service and replaced by some poorly trained contract sergeants who will earn more than before.  Two-thirds of officers don’t get premium pay for now, and the KPRF is probably skeptical that greatly increased pay for all remaining officers will be actually be delivered in 2012.  The future it sees has a mass of officers and sergeants, not differentiated by much of anything, including pay.  While the officer-NCO interaction was long ago worked out in Western armies, it’s still a troubling vision for an army in the throes of major structural changes and lacking a professional NCO tradition.

KPRF Ramped Up for Defenders Day 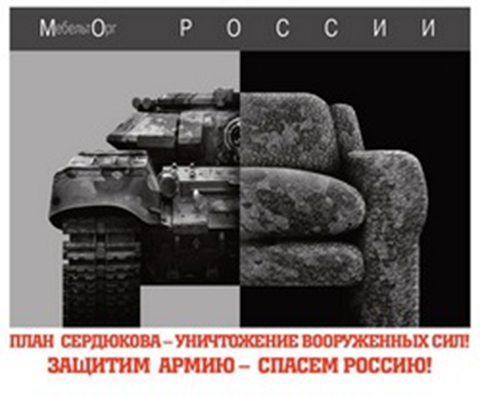 This came from the KPRF.ru site on Saturday.  Instead of МО for Министерство обороны in the upper left, they’ve put it as МебельтОрг or furniture sales, making light of Serdyukov’s background in the furniture business.

The bottom says, “Serdyukov’s Plan is the Destruction of the Armed Forces!  We’ll Save the Army, We’ll Save Russia!”