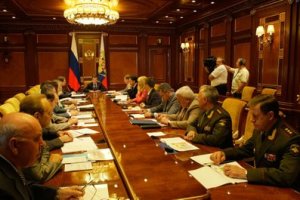 Talk of military conscription changes has swirled in recent months.  Many potential changes have been attributed to General Staff Chief Makarov or his deputy, GOMU Chief Vasiliy Smirnov.

In the last week, the press has published favorable reports on the just-concluded spring draft campaign.  But, meeting with PA officials and ministers in Gorki yesterday, President Medvedev sounded a different note, indicating that a deeper look at Russia’s military manpower resources and policies is needed.

The meeting included relevant ministers, but not Prime Minister Putin.  Along with Makarov and Smirnov, Defense Minister Serdyukov and ROSTO / DOSAAF Chief Sergey Mayev attended.  Smirnov appears in uniform (bottom right of the picture), though it’s been thought he retired and put on civilian clothes.  He’s already 60, so he’s beyond the age limit for a general-colonel.  He’s served in the General Staff since 1982.  He was a GOMU directorate chief in the mid-1990s, then Deputy Chief, and Chief since August 2002.  Few Russian military officials should know their issues as well as Smirnov.

The key points in Medvedev’s meeting kickoff are that (a) Armed Forces’ manpower requirements are not being met; (b) no decisions on conscription changes have yet been taken; and (c) the public is supposed to get at least some kind of input on the issue.

Kremlin.ru’s coverage of the beginning of the meeting follows.

“Dmitriy Medvedev spoke of the need to conduct a rigorous analysis of the situation with military conscription and draw up proposals for its improvement.”

“We have an important issue for the life of our state — the issue of military conscription.  It’s clear that the overall effectiveness of the state, and ensuring security in the country depends on how we man our Armed Forces, and our law enforcement organs.”

“It’s clear that now there are complications:  army and navy requirements for conscripts are not being fully met.  This is connected to the demographic component, to demographic problems; this is connected to the health problems of young people.  All these issues have been discussed more than once both in meetings, and in the mass media.  We have to talk conceptually about what to do next.”

“There’s a range of proposals.  I want to say right off that all these proposals are still just proposals.  They need careful analysis.  Not a single one has any kind of preliminary approval, and we need to discuss them.”

“At first we’ll discuss them with the participation of the leadership of the Government, Presidential Administration, Armed Forces leaders, law enforcement structures, and special services.  Subsequent to such a type of decision all the same it needs to be discussed with the broader circle of society.  It’s essential to take public opinion into account in any case  because this concerns a sufficiently significant number of people in our country.”