Kicking the Defense Ministry and OPK 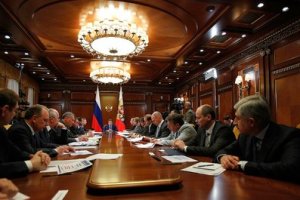 President's Meeting on the OPK

President Medvedev is irritated as ever that the Defense Ministry and OPK aren’t moving out smartly to rearm and reequip the Armed Forces.  He’s trying to kick them into gear, but can he get results where his predecessors either didn’t care or simply failed?

Then the President says:

“However, despite all adopted measures, the state of defense production cannot be called good, all attending understand this.  There are objective reasons:  the deterioration of enterprises’ basic capital is nearly 70 percent (on average), in some enterprises it’s all much worse.  We still have not even managed to establish effective mechanisms to attract innovation and off-budget resources to the defense-industrial complex.”

Medvedev goes on to say that all relevant documents, including the GPV 2011-2020, have been signed, but the assembled group still needs to think about how to implement the GPV.  He reviews how he talked at the Defense Ministry Collegium in March about balancing producer and buyer interests, about justifiable and understandable prices.

But in many areas, says Medvedev, this has already become moot, and he intends to increase responsibility for the fulfillment of these obligations.

First, he wants a Federal Goal Program for OPK Development in 2011-2020.  Its focus is to be “real readiness” of the OPK to produce actual weapons and equipment.

Second, he wants the Defense Ministry to finish placing GOZ-2011 completely by the end of May, and advance payments issued to producers in accordance with the 2011 and 2012-2013 plans.

Work to date, he says, is going poorly and slowly.  He reminds the assembled that he told them about the failure of previous state armament programs:

“Today I want to hear from all present why this happened:  both from government leaders, and from industry leaders, who was punished for this and how.  Report proposals to me, if they still aren’t implemented, with positions, with the types of responsibility, completely concretely.  If such  proposals aren’t reported, it means [industrial] sector leaders and government leaders have to answer for it.”

It’s unacceptable, he says, that high-level decisions have been made, money allocated, but a product isn’t supplied.  He recalls his late 2009 Poslaniye in which he said 30 land- and sea-based ballistic missiles, 5 Iskander missile systems, nearly 300 armored vehicles, 30 helicopters, 28 combat aircraft, 3 nuclear submarines, one corvette, and 11 satellites would be delivered in 2010.

Everyone here, says Medvedev, agreed with this, so why wasn’t it done.  He is, he says, waiting for an answer, and:

“. . . we have to answer for the duties we’ve taken on ourselves, we look simply in this sense absolutely unacceptable.”

Medvedev finishes by saying he knows military production is profitable, and it’s possible to attract strategic investors.  He says he wants to talk about how to stimulate investment.  The goal for the day is concrete reports on what’s been done on the level of those responsible for organizing work and correcting the situation in defense industry.

Not exactly throwing down the gauntlet, just another warning that he’s getting serious.  But it’s doubtful the government or defense industry will take Medvedev seriously until he fires a minister, other high-ranking official, or an important enterprise director.  And it’ll probably take more than a couple dismissals to get anyone’s attention.  Medvedev is running out of time on this account (as well as others).  Those he’d like to make responsible or punish will just take the tongue-lashings and wait him out.