Russian Federation President Vladimir Putin signed out his Constitution Day promotion list on December 12. You can view it here.

The 19 MOD promotees included two three-stars, a two-star, and 16 one-stars.

Also granted his third star, Admiral Nikolay Yevmenov commands the Northern Fleet. He was the sole naval officer promoted on this list. 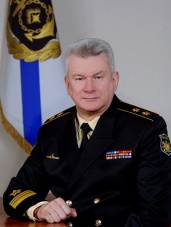 Nikolay Yevmenov as a vice-admiral

There were four new generals for whom no position could be identified at this time.

Other generals and admirals besides those noted above have been added or updated.