The GOZ This Week 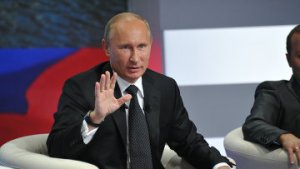 At United Russia’s interregional conference in Cherepovets on Monday, Prime Minister Putin reported on the Defense Ministry’s failure to conclude all its GOZ contracts by his most recent September 1 deadline.  Putin said, despite Defense Minister Serdyukov’s assurances that only OSK contracts need to be finished, agreements with MIT and OAK are still not finalized.

According to RIA Novosti and the stenogram, Putin told the United Russia audience:

“Unfortunately, full agreement between the Defense Ministry and producers by 1 September didn’t happen, as we arranged.  Disagreements continue there in several areas.”

“I want to direct the attention of all sides to this process:  firstly, we have a colossal amount of money being allocated for strengthening the country’s defense capability.  We’ve generally never allocated such money, well, in Soviet times, when they threw everything at the defense sector, there were comparable figures, but in recent history never, — 20 trillion to 2020.  We are constrained in other places – very many – either to stop or cut our expenditures, but we need to do this to guarantee our defense capability.  But we don’t need to absorb these billions and trillions, we need to provide items quantitatively and qualitatively.”

“At the same time, of course, the profitability of enterprises should also be guaranteed.  The obvious fact is a minimum of 15 percent.  It’s necessary to get this profitability so there are resources for development, for worthy wages for the workers.  I hope that soon, in the course of a week, this process will be concluded in shipbuilding, in missiles, and in aviation.”

“In 2012, orders, advances and other payments should be sent in full measure to enterprises not later than March.  I’m counting on this very much.”

Vedomosti’s source close to the Defense Ministry admitted a week won’t be enough to close contracts worth 500 billion rubles with Sevmash and tens of billions with MIT.

Kommersant’s source familiar with the course of negotiations with MIT confirmed that the process isn’t complete.  Another source said a contract for Yak-130 trainers is almost complete, but one for MiG-29K fighters isn’t.  Konstantin Makiyenko told Vedomosti the MiG-29K doesn’t matter since the Kuznetsov aircraft carrier is headed for repairs.

Most striking is Putin’s call, a plea almost, not to “absorb” the GPV’s 20 trillion rubles without supplying the new weapons and equipment the army needs.  He’s well aware the situation could be like water in sand.