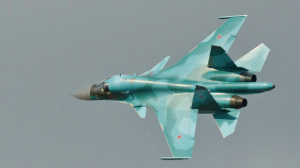 Early this month, Izvestiya’s Aleksey Mikhaylov and Dmitriy Balburov published on “growing pains” in Russia’s procurement of the Su-34 strike fighter.  The aircraft is “not combat capable” according to them.

A few English-language sites mentioned their story, but didn’t render it completely or accurately.

According Izvestiya, the Defense Minister may soon sign out a report on  defects in the Su-34 that interfere with its “full combat employment.”  Each of the 16 Su-34s received over six years reportedly has its own “individual problems.”

The authors say the Defense Ministry already won an 80-million-ruble suit against the Novosibirsk Aviation Plant named for Chkalov over undelivered aircraft.  They insinuate this Defense Ministry report could be the basis for more litigation against the airplane’s manufacturer.

A Su-34 pilot told Izvestiya radar and targeting-navigation system problems interfere with flight training in the aircraft.  Malfunctions, he says, are the result of both programming problems and technical flaws.  A maintenance officer said each aircraft has “its own characteristics,” for example, an auxiliary motor located in different places on different borts.

Two Su-34s delivered to Lipetsk in 2006 are allegedly non-operational, and sit at the airfield for show.  However, the best airframes are the last three borts sent to Baltimor / Voronezh last summer, a VVS Glavkomat officer told the authors.

OPK representatives expressed surprise at the military’s complaints, noting that the early production run of any aircraft entails problems.  Some blamed a low level of training among VVS pilots and technicians for difficulties with the Su-34.

The Izvestiya report seems at odds with the recent announcement that delivery of a second Su-34 squadron is beginning.  In fact, the media reports five more aircraft arrived at Voronezh from Novosibirsk just days ago.  Practically the same day, Defense Minister Shoygu visited the city, airfield, and other VVS institutions.  It may be that his predecessor Serdyukov was inclined to criticize the OPK and the Su-34’s quality.  So maybe Shoygu won’t approve the Su-34 report.  But that doesn’t necessarily mean there aren’t real problems with the aircraft.