At the outset of the May 8 MOD collegium, Defense Minister Sergey Shoygu announced a shake up in the Russian Navy’s leadership.

Admiral Vladimir Korolev — Navy CINC for just three years — was retired by a May 3 presidential ukaz. He will be 65 next February 1. Shoygu was gracious saying in 46 years of service Korolev strengthened Russian defense capabilities, returned the fleet to the world’s oceans, and rationalized fulfillment of the shipbuilding program to 2050. 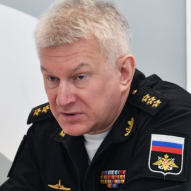 Born April 2, 1962, Yevmenov graduated the Higher Naval School of Submarine Navigation (Leningrad) in 1987. He was assigned to the navigation department of a Soviet Pacific Fleet submarine. He completed his senior service school, the Naval Academy named for Kuznetsov in 1999.

Yevmenov then served as an executive officer before commanding Delta III-class ballistic missile submarines K-490 and K-506 Zelenograd. Following a stint as chief of staff for the Pacific Fleet’s 25th Submarine (SSBN) Division, he graduated the General Staff Academy in 2003.

He returned to the 25th as deputy commander and then commander before becoming chief of staff and commander of the 16th Submarine Squadron (all Pacific Fleet nuclear-powered ballistic missile, cruise missile, and attack subs). In 2012, the 16th was renamed simply Pacific Fleet Submarine Forces.

In September 2012, Yevmenov switched fleets with an appointment as chief of staff, first deputy commander of the Northern Fleet. He became Northern Fleet Commander in April 2016 as a vice-admiral (two-star). He was promoted to admiral in December 2017.

After a very brief stint as Black Sea Fleet commander, Vice-Admiral Aleksandr Moiseyev replaces Yevmenov in the Northern Fleet. Moiseyev’s also an SSBN driver, and his career is very similar to Yevmenov’s but far more illustrious. 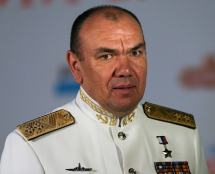 It’s difficult to see how Yevmenov got ahead of Moiseyev, but he did. There must be a logic obvious to the Kremlin in the choice of Yevmenov, it’s just not apparent to outsiders right now.