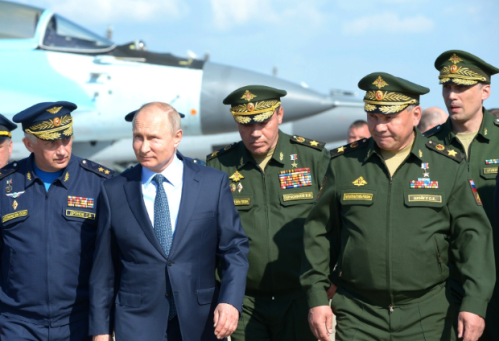 Putin walks the flight line at Akhtubinsk on May 14

Russia’s Supreme CINC boosted the fortunes of the country’s fifth generation Su-57 fighter declaring yesterday that Moscow will procure 76 of them. Until now it appeared the VKS might only receive a handful and forego series production altogether.

According to Kremlin.ru, Putin said:

“Multipurpose fighters Su-35S and Su-57 are in the final phase of state testing. These aircraft have unique characteristics and are the best in the world. It’s essential to fully rearm three Aerospace Forces regiments with the future aviation system fifth generation Su-57.”

“At the range [Akhtubinsk] yesterday the Minister [of Defense Shoygu] and I talked about this. Under the arms program to 2027 it’s planned to buy 16 of such aircraft. We analyzed the situation yesterday, the Minister reported. As a result of the work we did, as a result of the fact that we agreed with industry, — industry has practically reduced the cost of the aircraft and weapons by 20 percent, — we can buy many more of these combat aircraft of this class, of this, essentially, new generation. We agreed that we will buy over that time period 76 of such airplanes without increasing the cost. We have to say that in such volume, but the volume isn’t even the thing, the thing is we haven’t done anything like this new platform in the last 40 years. I hope the corrected plans will be fulfilled. And we’ll soon complete the contract for the systematic delivery of 76 of these fighters equipped with modern aviation weapons and the essential supporting ground infrastructure.”

Seventy-six is an odd number. Seventy-two would make three two-squadron regiments (24 fighters per).

Looks like Putin laid down a hard line with Sukhoy and KnAAPO. But hardware price issues have a way of persisting even after the Supreme CINC has spoken. Industry, after all, has to recoup its development costs and keep up with rising prices for components, etc.

Presumably, the 76 Su-57 fighters will have the “second phase” engine giving them true fifth generation maneuverability. That engine is still in testing that won’t finish til 2023. Could make for quite a backloaded production scheme.

Maybe saying Russia will produce reams of Su-57s is no skin off Putin’s nose. In 2024, he’ll be out of office unless he officially makes himself president-for-life. Still Putin can’t fight time; he’ll be 71 when [if] the 2024 election happens. When those 76 Su-57s are supposed to be done, Putin will be 76 years old. Ironic.